Please ensure Javascript is enabled for purposes of website accessibility
Log In Help Join The Motley Fool
Free Article Join Over 1 Million Premium Members And Get More In-Depth Stock Guidance and Research
By Andrés Cardenal - May 28, 2016 at 9:38AM 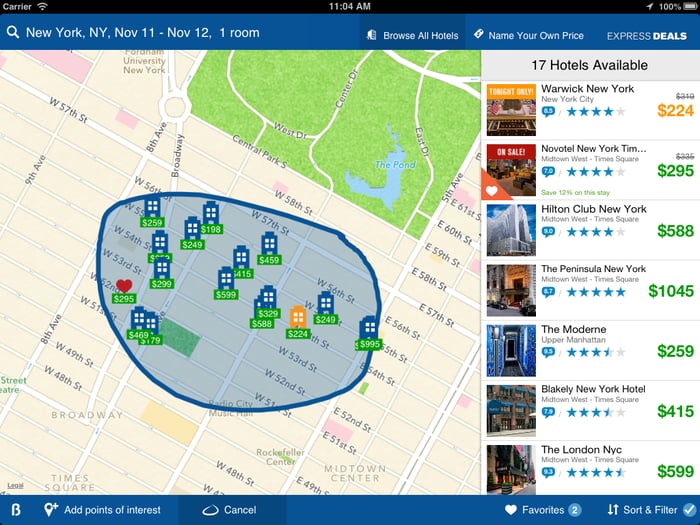 Priceline (NASDAQ: PCLN) is having a mediocre year: The stock is roughly flat over the last 12 months, in part due to growing fears about currency headwinds and increasing competition from players such as Expedia (NASDAQ: EXPE) and Airbnb. On the other hand, when considering the company's business quality, rock-solid financial performance, and attractive valuation, Priceline stock looks well positioned to produce solid returns going forward.

Priceline is the market leader among online travel agencies on a global scale. Competitor Expedia has a big presence in the U.S., but Priceline is way ahead of Expedia in international markets. Priceline's total revenue of $9.2 billion in 2015 significantly outpaced the $6.7 billion in sales Expedia generated during the year. Besides, Priceline produces nearly 85% of gross bookings from international markets; only 35% of Expedia's gross bookings came from foreign countries last quarter.

Both Priceline and Expedia have made important acquisitions over the past several years. Big purchases from Priceline include names such as Agoda.com, Kayak, Rentalcars.com, and OpenTable, while Expedia bought Trivago, Travelocity, Orbitz, CheapTickets.com, and HomeAway, among others. Consolidation is a major plus for investors in the sector, as it keeps pricing competition at bay, allowing Priceline and Expedia to operate with juicy profit margins.

The network effect is also a crucial source of competitive strength in the business, as hotel operators, airlines, and car rental companies want to work with the platforms that offer them access to the largest numbers of customers. Similarly, travelers choose the platforms offering more and better travel deals. Customers and industry operators attract each other to the leading platforms, and a bigger platform makes a service more valuable to both.

Priceline and Expedia are increasing their investments in marketing, and this is putting some pressure on profit margins, as are the new competing platforms such as accommodation-sharing site Airbnb that are rapidly gaining traction on a global scale. On the other hand, the online travel market should be large enough to accommodate multiple   thriving players for many years ahead, and Priceline's competitive strength is second to none in the industry.

Because Priceline has a big presence in international markets, foreign currency headwinds are putting a considerable drag on its sales and earnings. Nevertheless, the company is still reporting outstanding financial performance, despite those challenging macroeconomic conditions.

The business produced $16.7 billion in gross bookings during the first quarter of 2016 -- an increase of 21% in U.S. dollars, and a much bigger jump of 27% in constant-currency terms. Revenue amounted to $2.15 billion in during the quarter, with gross profits of $2 billion. Paralleling the gross bookings rise, the year-over-year increase in gross profits was 21% in U.S. dollars and 27% in constant currency.

Priceline retained nearly 26% of revenue as operating profits last quarter, and the key operational metrics confirm that the business is firing on all cylinders. The company registered reservations of 136.5 million hotel room nights during the period, an increase of 30% versus Q1 2015. Priceline's main platform, Booking.com, ended the quarter with 900,000 available hotels and other accommodations in over 220 countries, growing by 31% year over year.

All this comes for a very reasonable price. Priceline stock carries a forward price to earnings ratio around 16 times earnings forecasts, relatively inexpensive compared to the average of 18 for companies in the S&P 500 index.

Valuation is about much more than comparing particular metrics for different companies; valuation ratios need to be interpreted in the context of the company's weaknesses and strengths. Priceline is far superior to most other companies in the S&P 500 in terms of growth potential and profitability, so the company could easily justify a much higher valuation. At its current price, it looks like Priceline stock is offering material room for appreciation in the years ahead.