Please ensure Javascript is enabled for purposes of website accessibility
Log In Help Join The Motley Fool
Free Article Join Over 1 Million Premium Members And Get More In-Depth Stock Guidance and Research
By Rich Duprey - May 29, 2016 at 11:21AM

Bullish billionaire investors may be signaling its time for everyone to spruce up their portfolios with the home improvement center's stock.

Home Depot has been delivering the goods for professional investors, and it just may be worth it for small retail investors to follow them through the door.

After three straight months of falling new-home sales, the housing sector perked up in April as sales jumped to their highest level since 2008. That bodes well for do-it-yourself home improvement center Home Depot (HD 1.88%), which has done surprisingly well in good markets and bad.

The reason is simple, really: Even in a down market for housing, when fewer people can afford to buy (and improve) new homes, homeowners will still choose to spruce up their existing homes. And that could be the reason why nine billionaire-led hedge funds have chosen now as the time to build out their portfolios with Home Depot stock.

The Motley Fool waded into dozens of recent 13-F filings, which these private equity funds are required to file with the SEC, and discovered that nine hammered down more than 2.6 million shares of Home Depot during the first three months of the year.

Certainly you don't want to follow these billionaires blindly, as they're certain not always correct in their bets. But it does seem telling that rival Lowe's (LOW 1.65%) didn't enjoy the same sort of institutional support as Home Depot did, particularly since the stocks of the two companies have largely marched in lockstep over the past five years. 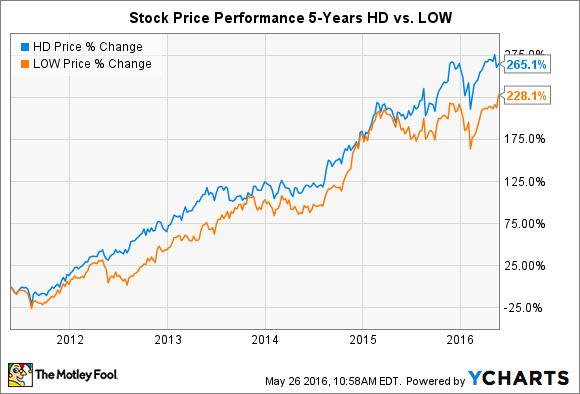 So what accounts for the apparent enthusiasm for Home Depot? There may be a few reasons.

Home Depot operates some 2,275 retail stores across all 50 states, the District of Columbia, Puerto Rico, U.S. Virgin Islands, Guam, 10 Canadian provinces, and Mexico. Lowe's on the other hand, has 1,860 stores. Yet despite its larger footprint, Home Depot enjoyed the same sort of growth rate in U.S. comparable-store sales as Lowe's did. (In fact, at 7.6%, Big Orange actually managed a hair more growth than the 7.5% its rival saw.)

Comps are an important retail metric because they strip out the sales growth that can be achieved simply by opening more stores, so they're viewed as a better organic indicator of a retailer's health and potential. Home Depot also enjoyed greater customer traffic than did Big Blue.

Looked at another way, although Home Depot has 22% more stores than Lowe's, its stores were conducting 43% more business than its rival's.

While the two chains have comparable gross margin rates of around 34%, when you look at operating margins and net margins, Home Depot is sprinting away from Lowe's. Big Orange's operating margin clocks in at 13.3% versus Big Blue at 8.4%, while its 7.9% net profit margin is nearly some 363 basis points higher than Lowe's. 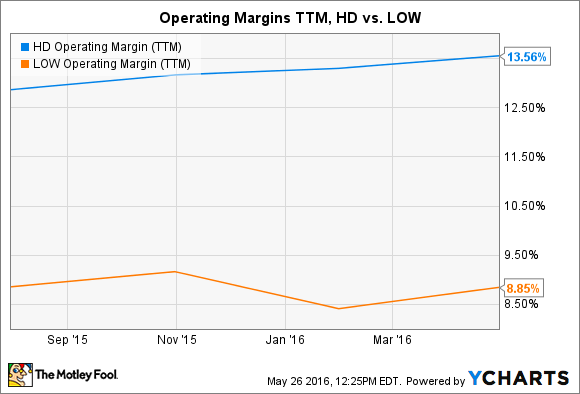 Bringing it all home

There seems to be good reason why those big billionaire investors are knocking on Home Depot's door, and with the housing market perhaps getting ready to turn up once more, DIY investors may just enjoy some improvement in their returns if they follow them into its stock.