Please ensure Javascript is enabled for purposes of website accessibility
Log In Help Join The Motley Fool
Free Article Join Over 1 Million Premium Members And Get More In-Depth Stock Guidance and Research
By Nicholas Rossolillo - May 29, 2016 at 8:21PM

Despite returning to growth in the latest quarter, Coach's stock has stalled.

It's been a long downward spiral for leather fashion designer Coach (TPR 0.98%), but the company may finally be turning things around. It reported earnings on April 26 and posted solid growth. Despite the reassuring numbers, though, Coach stock hasn't responded in kind. What does the company need to do to get the stock on an upward trajectory and restore investor confidence?

After reaching a peak in 2013, Coach has seen revenues and profits steadily decline. Here's a chart depicting the trend: 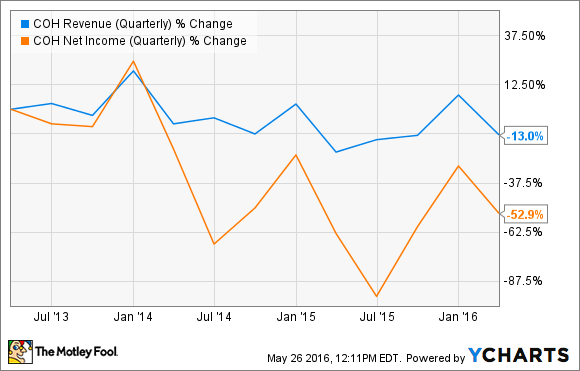 Over this same time period, consumer spending in the U.S. was on a steady incline. So, why has Coach been suffering? The reason is twofold: encroachment on sales by competition and Coach's transitioning of its own business.

While Coach has been on a shallow downward sales slope, other companies like Michael Kors (CPRI 0.54%), Kate Spade (KATE), Fossil (FOSL -1.35%), and privately held companies like Dooney & Bourke and Tory Burch have seen sales tick up overall. Michael Kors has more than doubled sales in the last three years, and until a more recent downturn in sales, Kate Spade and Fossil were sporting about 75% and 40% sales growth, respectively. 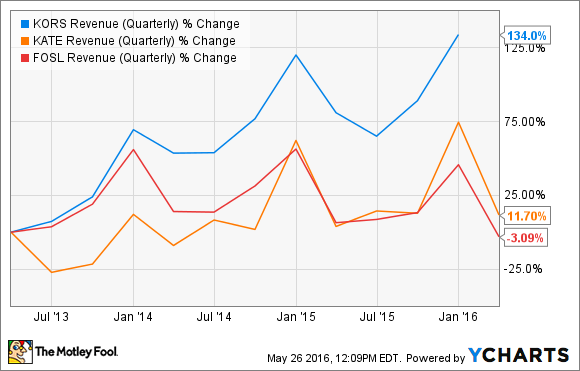 Despite difficulties arising from increased competition, Coach has started to show signs that sales have bottomed. In the latest quarter, the company saw a more than 11% increase in sales compared with the same quarter a year ago. Fiscal year to date, which includes the last nine months going back to last summer, Coach is outpacing last fiscal year's sales by almost 5%.

What has the company been doing to turn business around? Will it be enough to push share prices higher?

Almost two years ago, Coach management implemented a brand transformation and turnaround plan that is still under way. These changes included a three-pronged approach: a revamped product line, an updated store format and marketing campaign mirroring the product changes, and investments to improve efficiency.

Coach had a new line of leather products ready to go in 2014, but the biggest shake-up came in the spring of 2015, when the company purchased luxury shoe company Stuart Weitzman. It was the first time the company has operated as a multi-brand fashion house. The hope at the time was that the strategy would diversify its business and make Coach more competitive throughout the global fashion industry.

The company continues to incur charges for the purchase, seeing a 0.7% and 0.2% impact on gross and operating margins relating to financing and integration of Stuart Weitzman. However, the shoe company is having a positive effect on the top and bottom lines, with total Stuart Weitzman sales on pace to be 10% higher than last fiscal year, and an expected $0.12 per share contribution to earnings for the year. As Coach finishes paying for the purchase moving into the second half of the year, we should start to see an even more meaningful contribution to profits.

The store remodels and marketing campaign announced in 2014 are a continued expense, but management stated it is pleased with the comparable sales increases at their North American stores they believe to be associated with the measures. The outlet store model has been disappointing, though, so Coach has been shifting focus away from discounting and reducing the number of promotional events it pushes. The company is finding that, despite these sales reductions, consumers are still returning and making full-price purchases. This contributed to the first year-over-year quarterly sales increase the Coach brand has seen since 2013.

The third leg of the transformation plan is reducing costs. Coach has been closing underperforming stores to increase operating margin and shifting investment toward e-sales to make up the difference. Other efficiencies have been achieved by improving upon the distribution of products. For example, the completion of the purchase of Stuart Weitzman's Canadian distribution business is expected to take place this summer and will have a positive long-term impact on operating expenses. During the last earnings release, Coach also announced a 10% workforce reduction at its corporate offices.

Coach expects the majority of its transformation expenses to finish up this summer, and the company projects a positive impact on operating margin to take hold going into its next fiscal year starting in July.

What will return the stock to growth?

With Coach's management making changes, and the benefits of those changes just starting to be realized, the simple answer to what will push the stock higher is time. Patience will be required as the elevated expenses incurred with the transformation plan and the Stuart Weitzman purchase drag on profits, but as those expenses subside, the company should start seeing a more meaningful impact on business overall. The return to growth of the core Coach name brand is also a positive development, with international consumer interest leading the way. The addition of luxury shoes has also added growth to overall sales, but again, it will take time to see those new sales trickle down to profits for shareholders.

In the end, though, it looks as if the iconic American leather company has weathered the three-year storm and is poised to return to growth once fully emerged from its business facelift.