Please ensure Javascript is enabled for purposes of website accessibility
Log In Help Join The Motley Fool
Free Article Join Over 1 Million Premium Members And Get More In-Depth Stock Guidance and Research
By Joe Tenebruso - May 30, 2016 at 6:03AM

Looking for a low-risk investment with the potential for outsized gains? Then check out this stock.

Articles on retirement investments often focus on dividend stocks, and rightfully so; reliable dividend payers can help to provide a steady stream of income for retirees. But as legendary investor Warren Buffett pointed out in his 2012 annual letter, shareholders can create their own cash streams simply by selling off some of the shares they own over time. For businesses that can reinvest their earnings at high rates of return, this strategy can help to generate higher overall profits for shareholders.

It's in this spirit that I urge investors to consider the following excellent -- albeit non-dividend paying -- stock for their retirement portfolios.

Berkshire Hathaway (BRK.A 1.69%) (BRK.B 1.64%) is an incredible collection of businesses meticulously acquired by master investor Warren Buffett during his more than 50 years at the company's helm. These businesses span across many areas of the global economy, including insurance, railroads, utilities, manufacturing, retail, and more.

It's this broad diversification that helps to lessen Berkshire's risk profile -- an important aspect of a good retirement stock. It also provides many different areas in which the company can reinvest its ever-growing cash flows, thereby making it easier to earn attractive rates of return. This ability to successfully reinvest retained earnings has in turn forged Berkshire Hathaway into a compounding machine, one that snowballs its investors' wealth steadily -- and exponentially -- over time. 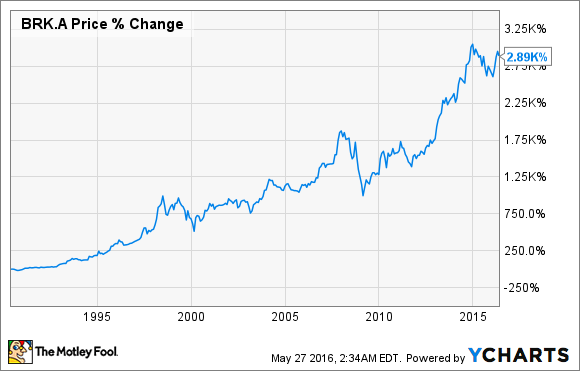 In addition to its wholly owned subsidiaries, Berkshire also invests in publicly traded businesses. Buffett and his two crack investing lieutenants, Todd Combs and Ted Weschler, manage an equity portfolio valued at more than $106 billion as of the end of the first quarter, comprised of some of the most competitively advantaged businesses available in the public markets. Combined with Berkshire's operating subsidiaries, the performance of these investments has helped to grow the company's book value per share by a staggering 19.2% annually over the past 51 years.

Yet the market is currently offering this financial juggernaut at a steep discount to its intrinsic value. As fellow Fool Brendan Mathews eloquently explains, valuing Berkshire Hathaway according to Buffett's -- and many Berkshire followers' -- preferred method suggests that the market could be undervaluing its stock by more than 30%. Buffett himself has said that Berkshire would aggressively buy back its own stock should it fall below 1.2 times book value -- a price only about 12% away from where the stock currently trades -- which should further help to support Berkshire's share price should it approach those levels. Together, these factors substantially reduce the risk of permanent losses for long-term investors who buy Berkshire's stock at current prices, while also increasing the possibility of outsized gains.

All told, Berkshire Hathaway is considered by many to be the crown jewel of American capitalism. It's one of the strongest, safest, and most consistently successful businesses in the world -- and it's currently available at a bargain price. As such, retirees may wish to consider adding some shares of Berkshire Hathaway to their diversified investment portfolios.