Please ensure Javascript is enabled for purposes of website accessibility
Log In Help Join The Motley Fool
Free Article Join Over 1 Million Premium Members And Get More In-Depth Stock Guidance and Research
By Daniel B. Kline - May 30, 2016 at 3:02PM

Membership grew by nearly 6% with U.S. renewals coming in at 90%.

Costco (NASDAQ: COST) saw net sales for Q3 2016 rise to $26.15 billion from $25.52 billion last year, but comparable store sales were flat globally due to lower gas prices. When adjusted to reflect the negative impact of gasoline price deflation and foreign exchange, the company posted comparable store sales gain of 3% in the United States, 8% in Canada, and 3% across the warehouse club's locations around the world.

The best news for the company however may be that membership fees -- where it makes about 70% of its profit -- grew by 5.8% to $618 million. New signups grew by 15% globally with renewal rates coming in a little over 90% in the U.S. and 88% globally, Chief Financial Officer Richard Galanti said in the post-earnings release conference call with investors. Total membership now stands at just under 47 million households. 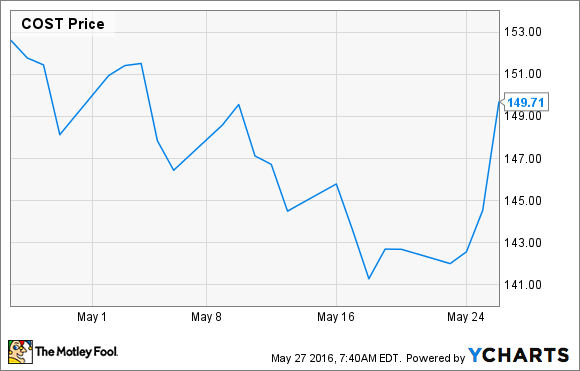 Good news despite some short-term trouble

Costco's results are more impressive given that it's in the middle of transitioning its store-branded credit card from American Express (AXP -1.46%) to Visa (V -2.67%). During the transition period the company has stopped taking signups for its about-to-be-defunct American Express cards.

Galanti noted during the call, which was transcribed by S&P Capital IQ, that "the short-term negative earnings impact of the lost co-brand credit card sign-ups in the quarter year-over-year was about $11 million, or $0.02 a share to the negative."

The new Visa cards, which are being automatically sent to current holders with no credit check required, have already been mailed to many customers. That process is continuing and the official changeover takes place June 20. As of that date, not only will Costco no longer accept American Express, but the old store-branded cards held by its members will no longer work.

The company's shareholders can also rejoice at the Q3 numbers because profits were not hurt by an ongoing wage increase.

This year, we also increased our bottom-of-scale hourly rates in [the] U.S. and Canada, which is about 80% of our company. Effective this past March 14, we increased our starting wage at $1.50 an hour to $13 and $13.50 an hour. The new bottom of scale wage increase results in a year-over-year incremental payroll expense of about $6 million, or $0.01 a share in the quarter.

Though Galanti noted that the company estimates that the higher wages will have a negative impact of $0.01 to $0.02  in each of the next three quarters "depending on which way it rounds."

It's all about the credit card switch

While the actual negative impact of the credit card switch has so far come from the fact that the company has not been taking new signups, in Q4, the company faces the actual switch. Because of the contracts with American Express and Visa, the change will be a bit abrupt. The current cards will be accepted until June 19, then they will go dead on June 20 when the new cards go live. Galanti commented on this during the call.

There's always going to be a little confusion, but to the extent that we haven't signed up new credit -- program credit card members, I don't think many members -- maybe people coming in to sign up for a classical membership have walked away because...they can't sign up with their Amex card.

The CFO noted that the company did not automatically issue credit cards. It was, and will be with the new Visa cards, a credit decision made by the card issuer (CitiGroup for the new Visas).

Galanti acknowledged that the freeze on new card signups may have impacted sales of big ticket items, before noting that "our TV sales have been pretty darn strong. So I can talk out of both sides of my mouth on this one."

Q4 will be an important milestone for the company as the new cards go live and shareholders learn if members drop out due to the transition, though the CFO expects the transition to play out over a longer time period.