Please ensure Javascript is enabled for purposes of website accessibility
Log In Help Join The Motley Fool
Free Article Join Over 1 Million Premium Members And Get More In-Depth Stock Guidance and Research
By Travis Hoium - May 30, 2016 at 10:00AM

Two new stadiums could be on the horizon in Las Vegas, which already has a plethora of event spaces.

There's a stadium battle going on in Las Vegas, and it doesn't seem like a battle anyone will ultimately win. MGM Resorts (MGM 3.63%) and AEG recently completed T-Mobile Arena on The Strip's south side, and now Las Vegas Sands (LVS 5.03%) wants to build its own 17,500 seat concert venue with Madison Square Garden Company (MSGN) on the north side, behind the Venetian's Convention Center.

This is on top of the Thomas & Mack Center, MGM Grand Garden, Mandalay Bay Events Center, and dozens of other venues in Las Vegas. Oh, and a proposed $1 billion domed football stadium Las Vegas Sands wants to build to attract an NFL team. Why is Las Vegas suddenly stadium central?

Gambling is no longer a growth market

Since peaking in 2007 at $6.83 billion, Las Vegas gaming revenue has been on a downtrend, with 2015 revenue totaling only $6.35 billion. Gambling is simply not a growth market at all in Las Vegas, and resorts are finding that customers want everything from parties to restaurants and attractions. And they're willing to spend money on those non-gaming activities. 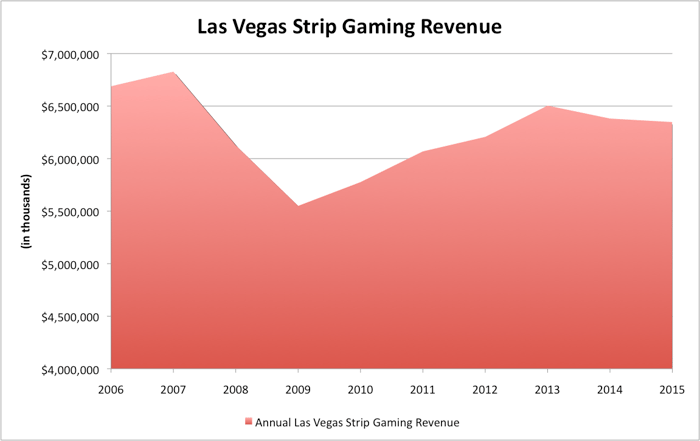 Since opening, T-Mobile Arena has been filled with everything from concerts to award shows and the upcoming UFC 200. As the largest venue in Las Vegas, and 3,200 seats larger than MGM Grand Garden, the venue will likely be a big draw to the south side of The Strip. And that's exactly what Las Vegas Sands is worried about.

Building a draw on the north side

You may notice that most of the venues I mentioned above are on the south side of the Las Vegas Strip. And that isn't lost on resorts on the north side. If all of the big events in Las Vegas are on the south side, it'll create a natural flow of traffic and hotel room demand on that side of The Strip, which is dominated by MGM Resorts.

Las Vegas Sands sees itself as having facilities that attract non-gaming visitors who spend on both gaming and non-gaming in the resort. And a new stadium could add to that attraction and pull events to its side of town. The one problem is that there are only so many shows going through Las Vegas that can draw 20,000 people, and there will be multiple arenas competing for these shows. That could make the stadium itself a money-losing endeavor.

The real winner in the stadium war

In the stadium arms race, I don't think the real winners will be the casino companies building out this new capacity. None of the new or proposed stadiums are directly on The Strip, meaning that customers leaving events don't flow directly onto the casino floor. It'll be easy to take a taxi, walk, or drive to another venue when an event ends.

I think the real winners if Las Vegas Sands builds one or more stadiums in the next few years will be Wynn Resorts (WYNN 2.11%) and Caesars Entertainment (CZR). Without spending a dime, they'll get overflow from the stadium crowd and get incremental revenue from big events attracted to the area.

It looks like The Strip will be flush with venues in the next few years, and I'm not sure they'll be full as often as casino companies currently think.