Please ensure Javascript is enabled for purposes of website accessibility
Log In Help Join The Motley Fool
Free Article Join Over 1 Million Premium Members And Get More In-Depth Stock Guidance and Research
By Matthew DiLallo - May 31, 2016 at 12:00PM

ConocoPhillips’s medium- and longer-term plans are focused on improving its balance sheet, prudently growing production, and returning capital to shareholders.

Like most oil companies, ConocoPhillips (COP 1.30%) has been forced to readjust how it operates in light of the downturn in oil prices. As such, the company is now managing its business along three time horizons -- short-, medium-, and longer-term -- instead of focusing the bulk of its attention on longer-term growth. In the short term, that means avoiding a repeat of past mistakes by defending against lower oil prices. Meanwhile, for the medium and longer terms, the company has three primary goals: improving its balance sheet, prudently growing production, and returning capital to shareholders. These time horizons were a focus of CEO Ryan Lance's comments on the company's first-quarter conference call.

On the call Lance pointed investors to the following slide: 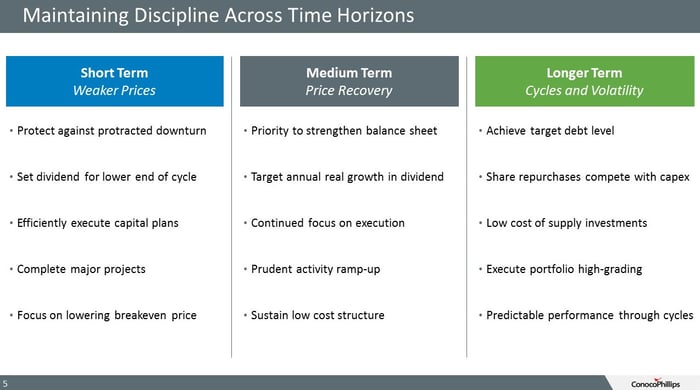 The company's discipline over the short term to protect against weaker prices, he noted,

... positions us to accelerate performance as prices improve in the medium term. Debt reduction will be a priority and we will target growing the dividend on a real annual basis. We remain focused on safely executing the business. We will complete several major projects in the medium term that will ramp up production from those projects. Finally, when prices start to recover, it will be important to stay diligent on our cost efforts.

In a lot of ways, the company's medium-term focus will be on reversing some of the actions the company took to protect against weak oil prices in the short term. For example, after raising $4.6 billion in low-cost debt last quarter to bolster its cash position, the company's goal as prices recover is to pay down that debt. Likewise, after slashing its dividend in light of weaker prices, ConocoPhillips is planning to deliver dividend growth as prices rise. That said, the company plans to remain diligent in one area: keeping a lid on costs.

Lance then turned to the company's longer-term focus, saying that its

... long-term goal is to execute predictable performance in a world of lower, more volatile prices. We can do this by achieving our target debt level and striving to maintain cash flow neutrality. Now we defined cash flow neutrality as capex for flat production plus our dividend equals cash from operations.

As Lance notes, over the longer term the company wants to get its debt back below its target level, which would mean reducing it from a current total of $29.5 billion to less than $25 billion. Further, it will strive to run its business so that it can be cash flow neutral at cycle lows. That being said, as prices increase the company has additional options. Lance explained:

As we generate cash in excess of cash flow neutrality, we have choices about how to allocate those funds. We can return cash to shareholders through share repurchases, or we can fund more investments in our low cost of supply resource base. Growth capex will compete with distributions to shareholders. That means we are not setting a target for absolute growth because we are willing to grow on a per-share basis if that makes more sense.

In other words, over the longer term the company will be focused on two things: returning additional cash to shareholders via share buybacks, and prudently funding investments to grow its production. What is different about this approach from its past plan is the elimination of an absolute growth target, which prior to the downturn had been set at 3% to 5% annually, even if it didn't have the cash flow to support that growth. Going forward the company is ditching this absolute growth target, in favor of per-share growth to be supported by share repurchases.

That approach is more in line with the one taken by oil behemoth ExxonMobil (XOM 2.23%), which typically grows its absolute production by a low-single-digit annual rate. However, ExxonMobil's per-share production growth has been much higher because of share repurchases. In fact, from 2003 to 2013 the company's absolute production just grew by 1% annually; however, thanks to a shrinking share count, production surged 48% on a per-share basis. That focus on share repurchases over absolute growth is one reason why ExxonMobil typically leads its peers in return-driven metrics by a wide margin.

ConocoPhillips has three primary goals over the medium and longer terms:

The company sees these goals improving its flexibility and its returns, which will enable it to create more value for investors throughout the oil cycle.