Please ensure Javascript is enabled for purposes of website accessibility
Log In Help Join The Motley Fool
Free Article Join Over 1 Million Premium Members And Get More In-Depth Stock Guidance and Research
By Demitri Kalogeropoulos - May 31, 2016 at 5:00PM

Why these two stocks jumped higher on Tuesday. 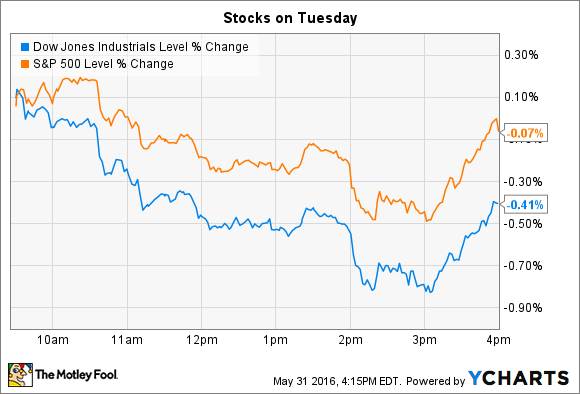 The key economic report of the day came from the U.S. Department of Commerce, which announced that consumer spending for the month of April jumped at its fastest pace in almost seven years. Consumption spending accounts for two-thirds of economic output, and it grew by 1% last month, compared to March's 0.4% uptick. The fresh data suggests economic growth is gaining momentum, which also bolsters the case for the Federal Reserve to stay on schedule for another interest rate hike in the coming months.

Cliffs Natural Resources soared 39% after the mining giant announced it has struck a major supply deal with steel titan ArcelorMittal, its largest customer. Under the agreement, Cliffs will be ArcelorMittal's sole outside supplier of iron ore pellets, to the tune of at least 7 million long tons (and as much as 10 million long tons) through the end of 2026.

While this deal just replaces a previous supply agreement and doesn't represent entirely new business, it does mark a higher overall minimum sales volume -- which is good news for Cliffs. "We arrived at a mutually beneficial agreement, as both companies recognize the importance of bringing sustainable value to our respective businesses," CEO Lourenco Goncalves said in a press release.

The agreement also removes a big question mark about the company's future revenue since its supply agreements were scheduled to expire in the next six months. The deal, management argued, "supports our conviction in the bright future of our Company, its employees, its shareholders, and all other stakeholders." The encouraging news was enough to send many of Cliffs' short sellers, which represented 36% of the float as of late April, running for cover on Tuesday.

The Jaguar Land Rover business turned in an especially strong performance, with volumes up 20%. On the other hand, Tata's passenger vehicle division slumped by 30% as the company opted to delay the introduction of its Tata Tiago hatchback.

Looking forward, the carmaker's results will be powered by new model introductions like the Tiago, which Tata plans to roll out at a pace of two vehicle launches every year through 2020. In the meantime, executives were encouraged enough by the recent operating trends that they approved a dividend payout following a one-year break. Shareholders cheered that move, and the surging profit result, by pushing Tata's shares up on Tuesday.