Please ensure Javascript is enabled for purposes of website accessibility
Log In Help Join The Motley Fool
Free Article Join Over 1 Million Premium Members And Get More In-Depth Stock Guidance and Research
By Brian Feroldi, Sean Williams, and Cheryl Swanson - May 31, 2016 at 9:03AM

Three contributors share their long-range views on the king of robotic surgery systems.

Robotic surgery pioneer Intuitive Surgical (ISRG -2.41%) first hit the public markets in June 2000, a handful of years after its founding. Any investor who was smart enough to pick up a few shares at the IPO has done remarkably well, as the company's stock has gone on to destroy the returns of the S&P 500 ever since. 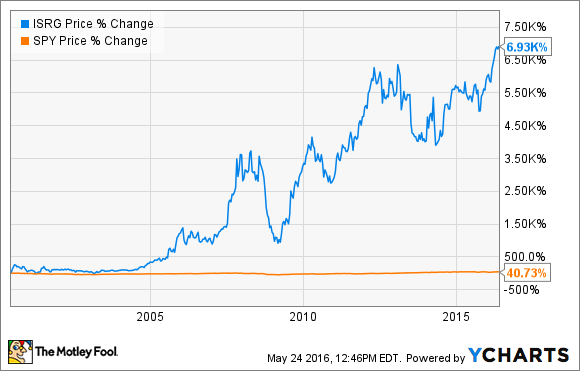 While there's no question that the company has been a great stock to own in the past, we Fools primarily concern ourselves with where we think companies like Intuitive Surgical are heading in the future. Knowing that, we asked a group of our contributors to peer into their crystal balls and share where they think this company will be in a decade's time. Read below to see what they had to say.

Brian Feroldi: I spent the better part of a decade selling a medical device, so I know first hand just how reluctant some healthcare providers can be to try something new. That experience has given me a real appreciation what Intuitive Surgical has accomplished, as the company truly has changed how surgery is performed. Now that they hold a commanding lead in their industry and have the wind at their back, I think that this company's future is extremely bright, which is a big reason why I've made Intuitive Surgical into one of my largest personal holdings.

When I look out a decade, it's not hard for me to imagine Intuitive dominating the general surgery category in the same way that it now rules in urological and gynecological procedures. Intuitive has a strong history of finding new uses for its da Vinci system, and in recent years, it has pushed into new procedures like inguinal hernia repair, colorectal surgery, and ventral hernia repair. As time passes, I'm confident that surgeons will find new uses for Intuitive's machine, which will continue to propel the company's growth for years to come.

It also wouldn't surprise me to see the company make a bold acquisition and gobble up one of the smaller robotic surgery companies to gain a foothold in new growth markets. Israel-based Mazor Robotics (MZOR) would be an interesting choice, as it is primarily focused on spine and brain surgery, two areas that Intuitive has yet to enter. Right now, Mazor Robotics is still small, and it's losing money each quarter, but if Intuitive was to step in and buy the company, they could easily scale up the business using their already existing resources to make it into a success. 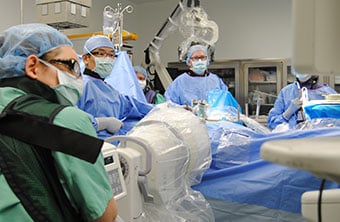 Of course, that is all speculation on my part, and Intuitive may feel that it has so much opportunity in other surgical areas that it's content to focus on organic growth. But no matter where management decides to focus the company's vast resources, I'm confident that Intuitive will continue to grow by finding new ways for its robotic system to make surgery better. For that reason, I can easily see myself being a shareholder for at least another decade.

Cheryl Swanson: If there's any healthcare industry that's ripe for disruption, it's robotic surgery. Thus far, pioneer Intuitive Surgical has pretty much owned the market, but with two big dogs muscling in, that time could be over in the next decade. Specifically, Alphabet (GOOG -3.08%) (GOOGL -2.92%) through its life sciences subsidiary, Verily, and Johnson & Johnson (JNJ -2.62%) through its Ethicon subsidiary teamed up last year to build what could be the ultimate platform for robotic surgery.

The new technology will attack Intuitive Surgery on two of its biggest vulnerabilities -- cost and safety. By integrating robotics with imaging and data analytics, the two titans hope to improve surgical robotics' accuracy, cost, efficiency, and patient outcomes.

Whether the partnership can do all that remains to be seen. But tech giant Google excels at building beautiful, straight-forward interfaces, the key to faster training and expanded utilization.  When you add in Johnson & Johnson's dominant position in medical devices, and its tendency to bundle products together at steep discounts to monopolize markets, these two companies could be holding the executioner's blade.

Not so fast, though. The surgical robotics market could easily prove more valuable than anyone has imagined. Stratistics MCR projects it reaching almost $18 billion by 2022, up from $3.9 billion in 2015, representing a compound annual growth rate of 24%. While J&J and Google have the financial firepower to undercut Intuitive on price, the more important question for investors is whether the company will keep its authoritative lead in new technologies. If so, Intuitive investors should have a bright decade.

Sean Williams: Though no one has a crystal ball that can predict the future with any accuracy, I'd suggest that robotic surgical giant Intuitive Surgical will still be quite successful and have dominant market share in a number of niche procedures a decade from now. However, I also believe the company will still be struggling to break the mold to gain wider surgical acceptance in hospitals.

Intuitive Surgical is already quite dominant in prostate and malignant hysterectomy surgeries, claiming more than 80% market share for robotics as opposed to traditional laparoscopic surgery. I would anticipate the company maintaining, or even slightly expanding, its market share here, as well as in new areas of focus, such as colorectal and thoracic procedures for which it had less than 10% procedure market share as of 2015.

Overseas markets probably represent Intuitive's biggest growth opportunity, as around three quarters of its total procedures now come from within the United States. Improved acceptance in the EU, and a bigger focus on Asia could pay handsome dividends for Intuitive Surgical by 2026.

The big concern I have with the company being so focused on the U.S. market is what might happen with healthcare drug and service pricing. We're once again at an inflection point where health insurance premiums are rising at a very quick rate, threatening to make insurance unaffordable for millions of Americans. If healthcare costs continue to climb, the number of patients treated without insurance could climb as well, putting more pressure on hospitals' bottom lines. If this scenario comes to pass, and doubtful provisions increase for hospitals, those institutions could get more leery about spending $2 million-plus on a new robotic surgical machine from Intuitive Surgical, which I suspect could temper the company's expansion into more generalized surgical procedures.

Overall, I see Intuitive Surgical's growth tempering a bit as the years wear on. But I also believe its dominant market share and vast trained physician network give it a big comparative advantage that will keep it healthfully profitable.