Heading into 2016, Whiting Petroleum (NYSE:WLL) had hoped that oil would average at least $50 a barrel, the magic level at which the company would generate enough cash flow so that it could drill roughly the number of wells needed to keep production basically flat. Unfortunately, oil prices declined well past that mark early in the year, leaving the company with no choice but to cut its investment below that sustainable level in order to match capital expenditures with its weaker projected cash flow. However, with oil recently regaining the $50 level, it puts Whiting Petroluem in a much more comfortable position.

When oil dove into the low $30s earlier this year, Whiting Petroleum had no choice but to slash its capex budget by 80% to just $500 million, which would roughly match its expected cash flow at those lower oil prices. That capital was just enough so that the company could complete wells drilled in 2015 -- it had initially planned to wind down its fracking operations by the end of the first half of the year. It was a decision that was based not only on the fact that it didn't have the cash to continue activities, but the returns it would earn on additional activities just weren't high enough to justify further investment.

However, with the return of $50 oil, it will have a significant impact on Whiting's cash flow from its legacy production. In fact, the company's initial estimate was that it would generate $1 billion in cash flow this year at $50 oil. That effectively doubles the company's cash flow, all else being equal. This provides additional capital to potentially to accelerate its drilling activities later this year.

In addition to substantially higher cash flow, the increase in the price of oil will significantly boost the returns Whiting can earn on new wells going forward, assuming oil stays in the $50s. That's because when oil was in the $30s, the company's drilling economics were marginal at best. However, with oil improving, so is the rate of return it can earn on new wells. In fact, as the slide below shows, Whiting Petroleum can earn an average internal rate of return of 55% on new wells drilled at $50 a barrel. 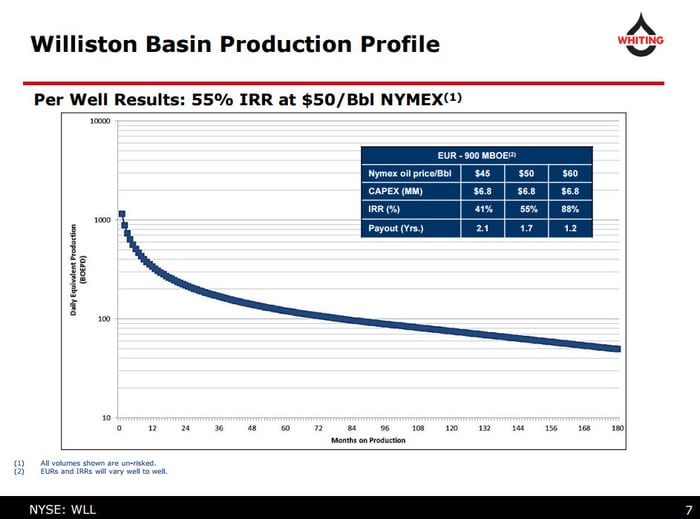 That's a very strong return, which would only improve if oil continues to rally.

Oil in the $30s wasn't just an issue for Whiting Petroleum. Rival Continental Resources (NYSE:CLR) also couldn't make any money drilling wells in the Bakken at $30 oil. That's why it turned its attention to the STACK play of Oklahoma, where returns were north of 20% at $30 oil. However, $50 oil puts the Bakken back on the map for Continental Resources, which can earn returns between 20% to 40%, depending on well size and costs. While that's not as high as the more than 60% returns of the STACK at $50 oil, nor as high as Whiting can earn in the Bakken, it's still a pretty compelling return and a vast improvement from earlier this year.

Oil rising back to $50 a barrel isn't just breaking through some physiological trading barrier. Oil above that price has a tangible impact on companies like Whiting Petroleum and could potentially double the company's cash flow while significantly improving its drilling returns. That's why oil's return to this key level is such a big deal for the company and the industry as a whole.