After surging to an all-time high above $50 in mid-April, shares of Hawaiian Holdings (NASDAQ:HA) have come back to earth in the past month and a half, falling to around $40. 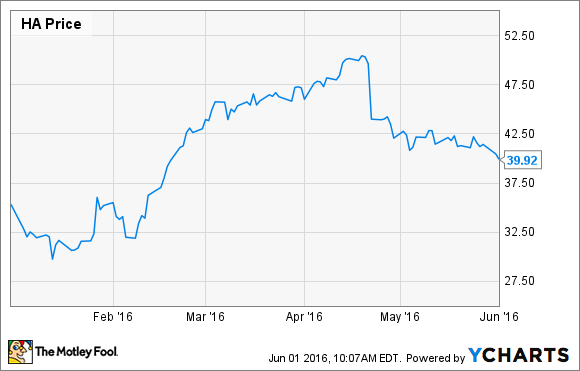 The sharp rise in Hawaiian's share price was driven partly by merger speculation after Alaska Air (NYSE:ALK) announced plans to acquire Virgin America (NASDAQ:VA) in April. This speculation has now started to fade. However, Hawaiian Airlines has strong profit momentum and plenty of long-term upside for investors, even on a stand-alone basis.

Within Hawaii, Hawaiian Airlines is the master of its destiny. With its population spread across several islands, the state is uniquely dependent on air travel. Hawaiian Airlines has a dominant market share on these interisland routes, with only one significant competitor.

By contrast, the West Coast-Hawaii market -- which accounts for about half of Hawaiian's revenue -- is ultra-competitive. For the past several years, industry capacity between the West Coast and Hawaii has tended to grow at an elevated rate, peaking with double-digit growth between late 2014 and mid-2015.

This capacity growth was driven in part by Alaska Air's rapid expansion in Hawaii. Alaska Air only began flying to Hawaii in 2007, but it now offers more than two dozen daily roundtrips to Hawaii, making it one of the biggest players in the West Coast-Hawaii market.

However, Hawaiian Airlines is also poised to improve its competitive positioning in the next few years. In the second half of 2017, it will receive the first of 16 highly fuel-efficient A321neo aircraft. These planes are smaller than the widebodies Hawaiian currently uses for West Coast flights, which will allow it to add more nonstop routes to secondary destinations within Hawaii.

In the past few quarters, international routes have been a bigger drag on Hawaiian's results than its domestic flights. However, headwinds in the international market are finally abating.

For the first time in several years, Hawaiian isn't facing a weakening yen in Japan, its largest international market. In fact, currency could actually be a slight tailwind in Japan during the second half of 2016.

That's good news, because Hawaiian Airlines is on the verge of a major expansion in Japan. In July, it will begin daily flights to Narita Airport, Tokyo's second major airport. Furthermore, it recently gained approval to start a second daily flight to Tokyo's Haneda Airport this fall, serving Kona and Honolulu on alternate days. (That said, there is still a chance Hawaiian could lose the rights for its other daily Haneda flight.)

Hawaiian Airlines is also benefiting from lower competitive capacity in Japan as some rivals retrench. It will see a similar boost in Brisbane, Australia, later this year as its only competitor plans to stop flying from Brisbane to Hawaii in October.

Finally, Hawaiian Airlines is starting to roll out its new premium cabin, featuring lie-flat seats. By early 2018, planes in this new configuration will serve nearly all of the carrier's long-haul routes. This should lead to higher average fares, as many well-heeled travelers will pay a big premium for a full, flat-bed seat on 10-hour redeye flights.

Analysts currently expect Hawaiian Holdings to post earnings per share of $4.69 this year. The stock currently trades for just 8.5 times this estimate, making it quite inexpensive.

Earnings per share could take a step backward in 2017 because of rising fuel costs, along with the costs of integrating Hawaiian's new A321neo fleet type and retrofitting its A330s with the new lie-flat premium cabin. Hawaiian's pilots are also clamoring for big raises, which could cut into profitability after they sign a new contract with the company.

However, Hawaiian is primed for strong earnings growth thereafter because of its solid position within Hawaii and for West Coast-Hawaii flights, along with improving trends in the international market. Hawaiian Holdings stock doesn't currently reflect that potential. If the company can capitalize on its growth opportunities over the next few years, the stock could soar well beyond its recent highs.