Americans don't like the companies selling them pay-television and Internet service, but they dislike them less than they have in the past.

The latest American Customer Satisfaction Index (ACSI) Telecommunications Report [register to download the report here] shows that both industries have improved their standing with consumers while still performing poorly. Subscription television service saw its score climb by 3.2% to 65 (out of a possible 100) pushing it slightly ahead of ISPs, which inched up 1.6% to an ACSI score of 64 for customer satisfaction

Despite the improvements, ACSI Research Director Forest Morgeson told The Motley Fool in a phone interview that "cable and Internet are still the lowest-ranked of the 45 industries we measure."

He noted that the companies that sit at the bottom of the ACSI rankings in these categories have the least satisfied customers of any businesses in the United States.

"They're the least satisfying," he said of the lowest-ranked company in both broadband and pay-television. "Those two categories are so intertwined -- subscription TV and ISP -- for the vast majority of consumers, they get both of those services from a single providers, so it's not surprising that the low satisfaction would effect both industries."

Which companies are the biggest offenders?

The good news for the bottom-dwellers in both categories is that scores have improved across the board. In subscription television, Mediacom, a relatively smaller player, came in last with a 54, which is actually 6% higher than last year's 51. The other 2015 cellar-dweller Time Warner Cable, which is now part of Charter Communications (NASDAQ:CHTR), bumped its score from 51 in 2015 to 59, falling just below its new owner, which dropped from a 63 last year to a 60. 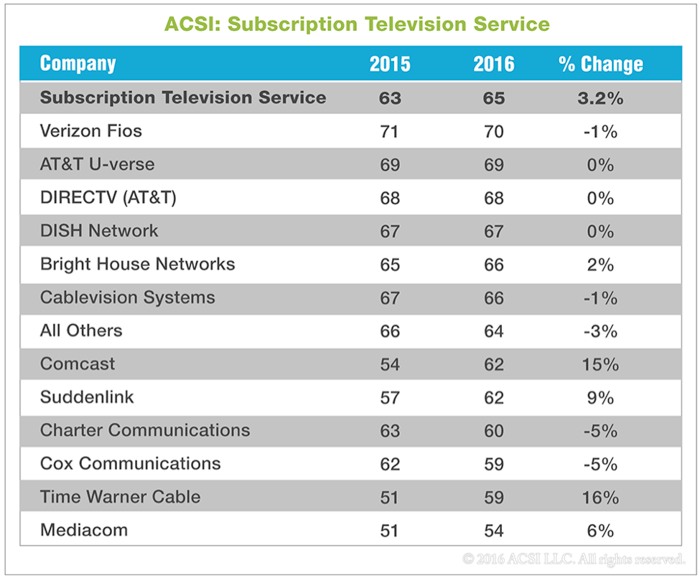 In the ISP category, Frontier Communications (OTC:FTR) came in last, dropping 8% from a 61 in 2015 to a 56 this year. That put it slightly below next-to-last finisher Mediacom, which scored the same 57 it did in 2015. 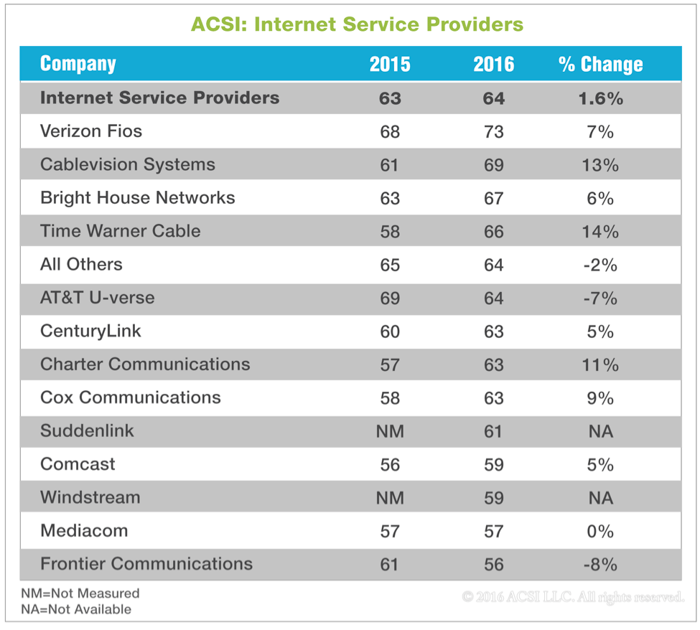 There is some good news

Comcast (NASDAQ:CMCSA), the largest Internet and cable provider in the U.S., devoted significant resources to customer satisfaction in the past year and those efforts paid off. While its numbers were still abysmal compared with other industries, the company did raise its ACSI score by 15% in subscription television and by 5% as an ISP.

"Changes do take time to integrate and even though changes can be based on a huge investment in customer service sometimes it takes consumers a long time to forget about the past and past mistreatment that they feel they they've experienced from a company," Morgeson told The Motley Fool. "That investment that you're seeing from Comcast certainly should have a log-term positive effect, but sometimes it's not going to be right away."

Sort of a silver lining for the industries

When it comes to restaurants or retailers, consumers can simply opt to shop elsewhere if they are not satisfied with the product or service. When it comes to ISPs and pay-television providers, that's often not possible.

"A lot of these companies have essentially a monopoly when it comes to cable TV. Obviously people can switch over to the satellite providers and still get subscription TV, but as everyone knows there are some drawbacks to taking that route," Morgeson said.

In addition, Morgeson noted that even in markets where people do have alternatives, their options may not be an improvement over their existing provider.

"When you get that kind of dynamic where you have choice, but your choice is even worse, you're just not going to have really pleased consumers," he said. "Frontier comes in at the bottom as an ISP so it's not much of a choice. It's a non-choice."

In a perverse way the lack of choice gives companies like Comcast, which has been trying to improve, and Charter, which now has to integrate Time Warner Cable, a chance to get better. These are better numbers for the industry across the board, but like a student moving from a D- to a solid D, there's still a lot of room for improvement.