International Business Machines (NYSE:IBM) is a complicated company. IBM sells hardware, including mainframe systems, Power servers, and storage; it provides a vast array of IT services across the globe, and it sells billions of dollars' worth of software each year. About 80% of its revenue comes from clients that use multiple IBM products and services, with the company's strategy of providing integrated solutions the key to its exceptional profitability.

There's no other company that does exactly what IBM does, and that makes comparing it to other technology companies difficult. IBM is worth more with all of its businesses working together rather than separately, a lesson learned during the company's near-death experience and subsequent turnaround in the early 1990s. But it can still be useful for investors to see exactly where IBM stacks up in certain areas. 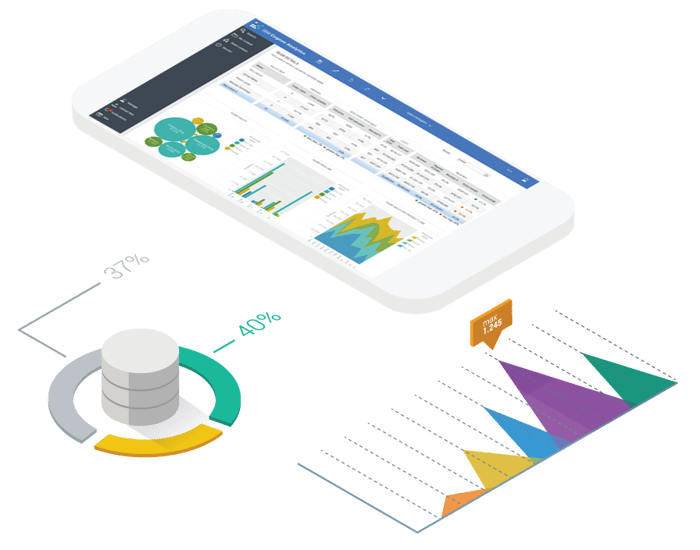 During 2015, IBM generated $22.9 billion from software sales. Most of this revenue, about $19.5 billion, came from middleware, which is software that acts as the glue between other pieces of software. Another $1.8 billion came from operating systems, while the remaining $1.6 billion was derived from other products.

If IBM's software segment were a stand-alone company, it would be the fourth-largest software company in the world. Microsoft (NASDAQ:MSFT) reigns supreme, with Windows, Office, and its many other billion-dollar software businesses putting the company far in the lead. Oracle (NYSE:ORCL) is in second, with its database products continuing to generate outsized profits for the company. And SAP (NYSE:SAP), with its broad set of software products, is in third.

IBM's software sales have been declining in recent years. The impact of currency fluctuations is one reason, with IBM's total revenue growth in 2015 negatively impacted by 8 percentage points because of a strong U.S. dollar. Another factor is the company's shift toward offering software as a service, which tends to push revenue recognition into the future. At the end of 2015, IBM's as-a-service annual run rate, which includes software as well as cloud infrastructure, reached $4.5 billion.

Despite the transition going on at IBM, the company's software business is still immensely profitable for the company.

Hardware represents a relatively small percentage of IBM's revenue, but it's still an important contributor to the company's success. Following the sale of its x86 server business in 2014, IBM's systems business is left with mainframes and Power servers.

During the fourth quarter of 2015, IBM claimed the No. 3 spot in the global server market, according to IDC. HP Enterprise was the clear leader, followed by Dell, IBM, Lenovo, and networking giant Cisco.

IBM posted strong server revenue growth during the quarter, driven by both its mainframe systems and its Power systems. Mainframe sales are highly cyclical, spiking when a new system is introduced and falling off rapidly after a few quarters, so IBM's share will fluctuate going forward. Mainframe sales declined during the first quarter of this year, following exactly this pattern.

IBM is the only top-five server vendor that doesn't sell x86 servers. The company is instead working to make its POWER processors a viable alternative to x86 chips in the hyperscale data center market through the OpenPOWER Foundation, which includes about 150 other companies. Progress has been slow over the past few years, but momentum is starting to build. In April, Alphabet's Google announced it was developing a server architecture based on IBM's POWER processors, a move that could mark the beginning of the end of Intel's uncontested dominance in the data center.

IBM is a lot more than a software and hardware company, especially considering the company's heavy investments in cloud computing. But comparing IBM's cloud business to those of other cloud computing giants is difficult. IBM doesn't break out infrastructure-as-a-service revenue explicitly, and neither does Microsoft or Google. This comparison wouldn't be all that relevant, though, since IBM's cloud computing strategy is far deeper than simply aiming to be a IaaS provider.

IBM is a company in transition. Resources are being shifted toward high-growth areas like cloud computing and analytics, and legacy businesses with poor growth prospects are in decline. Still, IBM remains a major force in the software market, and its position in the hardware market could improve as the OpenPOWER initiative matures.