There may have never been a more interesting time to compare Facebook and Twitter than right now. In the past 12 months, Facebook (NASDAQ:FB) stock has soared, hitting all-time highs. Twitter (NYSE:TWTR) stock, on the other hand, has plummeted during the same period, hitting all-time lows. Is Twitter stock the obvious buy because its price has tumbled so low? Or is there more to the story? 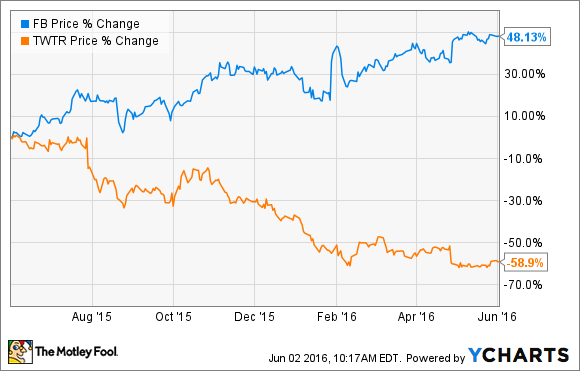 To find out which stock looks like a better buy at these prices, let's see which company comes out on top in a head-to-head comparison.

With a $341 billion market capitalization, Facebook has clearly found favor in the market. Its megacap valuation prices in continued rapid growth for years to come. But can the social network juggernaut keep delivering?

As is the case with many fast-growing companies, Facebook isn't just delivering consistent growth on its top line. Its net income is rising even faster. Q2 GAAP net income hit $1.51 billion -- up from $512 million in the year-ago quarter.

After reporting a sequential decline in its core users in Q4, Twitter fortunately managed to increase its monthly active users from 305 million to 310 million in Q1. But investors held back any excitement, as management noted the gain was only "driven by seasonality and marketing initiatives." Until the company shows it can increase its user growth level based on changes to its platform aimed to help it appeal to a larger market, investors will likely continue to believe Twitter's monthly active user base is limited to a much smaller sub-segment of Facebook's mass-market appeal.

For now, Twitter's forecast revenue growth is both underwhelming and disappointing. Twitter guided for second-quarter revenue in the range of $590 million to $610 million, management said in the company's first-quarter report. This implies a year-over-year growth rate of about 19% -- far below its 36% year-over-year revenue growth in Q1 and its 46% growth in the trailing 12 months. Investors are understandably worried about just how rapidly revenue growth could continue to decelerate.

But Twitter stock has one important thing going for it: After falling out of favor in the market, a price-to-sales ratio of just 4.4 already prices in years of headwinds as the company attempts to find its way to a meaningful level of regular profits.

At these prices, I believe Twitter is the better investment. In this case, a contrarian view appears to make sense; Twitter stock's far more conservative valuation simply looks more compelling. However, this doesn't mean I would sell Facebook stock; the pricier company's recent execution has truly been astounding.