What: Shares of retailer Conn's (NASDAQ:CONN) tumbled on Thursday following the company's first-quarter report. Conn's results were well below analyst expectations, with same-store sales declining and the credit business posting a big loss. At 12:45 p.m. ET, the stock was down about 23%.

So what: Conn's reported quarterly revenue of $389.1 million, up 6.6% year over year but about $4 million short of the average analyst estimate. Same-store sales slumped 3.4%, although excluding product categories that Conn's has exited, the decline was a less-severe 1.3%. Furniture was the only product category that posted same-store sales growth.

Adjusted EPS came in at a loss of $0.31, down from a gain of $0.44 during the prior-year period and a whopping $0.37 below analyst expectations. Ongoing trouble at the company's credit business is mostly to blame, with the credit segment reporting a $46.9 million operating loss. That's down from just a $17.9 million loss during the same period last year.

Going forward, Conn's doesn't expect much improvement this fiscal year. Same-store sales are expected to decline by a mid- to low-single-digit percentage, driven by tighter underwriting standards. Conn's finances the majority of its retail sales in-house, so any tightening of its credit business will have a negative effect on sales.

Now what: Conn's business model, where it finances consumers with sub-prime credit, isn't working at all right now. Losses in the credit business are more than erasing profits from the retail business, and the 60-day delinquency rate remains elevated. Conn's expects things to get better next year as changes in its credit business take hold, but there has yet to be any sign of improvement. 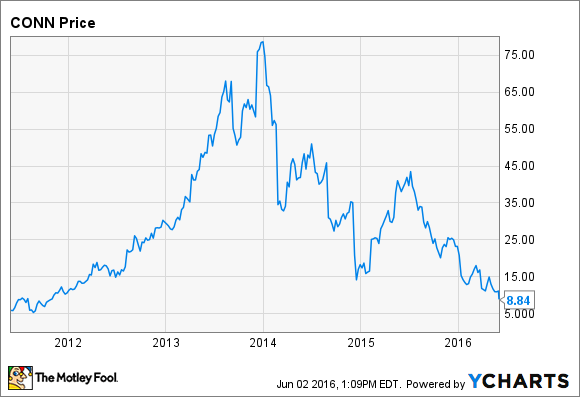 Following Thursday's collapse, shares of Conn's are at the lowest level since late 2011, trading just shy of $9 per share. That's a steep drop from the beginning of 2014, when Conn's stock traded at roughly $80 per share. Credit problems began to crop up around that time, driven by loose lending in previous years, and the stock went into free fall. Investors kept that trend intact on Thursday, punishing the stock for another dismal quarter.