Nitrogen fertilizer manufacturing company CVR Partners (NYSE:UAN) recently completed a game-changing acquisition, which significantly boosted its size and scale. That transaction also boosted the company's debt level, which was reflected in the fact that a major credit rating agency assigned it a non-investment, or junk, credit rating. That low credit rating, however, doesn't necessary mean that this is an overly risky stock. Instead, investors can breathe a bit easier thanks to the fact that it's part of a cash-rich family of companies that also include CVR Energy (NYSE:CVI) and CVR Refining (NYSE:CVRR), and it has a rich investor in Carl Icahn.

A caution flag for CVR Partners went up earlier this week, after it announced that an offering for a private placement of $625 million in senior secured notes due in 2023. It's debt that credit rating agency Moody's (NYSE:MCO) rated as B1, which is a non-investment-grade rating. In fact, on the scale of bond ratings it's in the highly speculative category, four notches below investment grade. The rating suggests that CVR Partners is more vulnerable than higher rated issuers to adverse market conditions, which could affect its ability to meet its financial commitments. In other words, if nitrogen fertilizer market conditions worsen, CVR Partners is at a heightened risk to default on this debt.

Having said that, its credit rating agency sees this risk being relatively minor, noting:

CVR generates solid EBITDA margins that drive good operating cash flows. The company also benefits from its two production facilities, which provide diversity of earnings and feedstocks, as well as market access to the mid-Corn Belt and Southern plains. While the MLP structure will demand regular cash distributions, we expect CVR to manage liquidity needs prudently in the currently challenged nitrogen markets that could persist through 2017.

Having made note of that, the reason CVR Partners was assigned a non-investment-grade credit rating had to do with "its small scale as measured by revenue" and "concentration of earnings in two production facilities." Further, the rating agency noted that CVR Partners is "challenged by operating in the seasonal commodity nitrogen business that is likely to experience trough market conditions toward year end 2016 and into 2017." In other words, it's a solid company but has some potential weaknesses that could cause credit concerns down the road, hence the low credit rating.

Those concerns aside, its credit rating agency did make it a point to note that the company is backed by Carl Icahn. It said that his ownership position provides some "intangible benefits," which should "facilitate financing needs that might arise in times of stress." This could come from a potential equity cash infusion by Icahn or his backing of a loan.

Further, Icahn isn't the only noteworthy investor in CVR Partners. CVR Energy owns more than a third of its outstanding units, which is worth noting because CVR Energy is a cash-rich entity. As of the end of last quarter, the CVR Energy empire had consolidated cash and equivalents of $681.8 million: 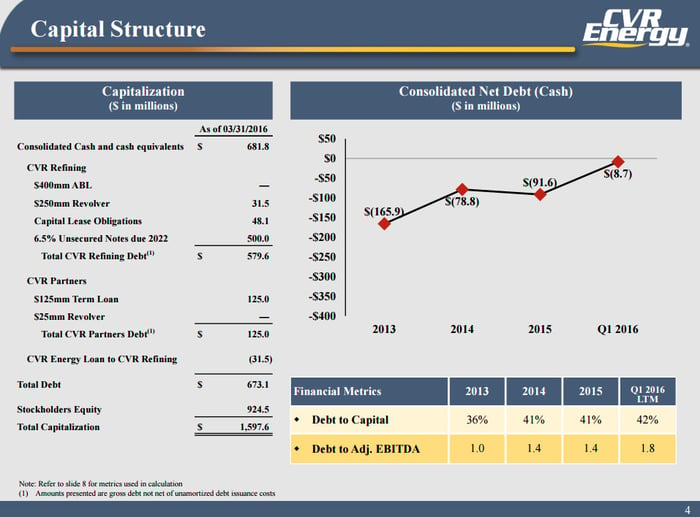 That's a lot of cash, and in fact it was more than the combined debt of both CVR Refining and CVR Partners as of the end of last quarter. In other words, this is a cash-rich parent company that could also come to CVR Partners' rescue if it needed some assistance. In fact, it has already provided assistance to sibling CVR Refining, via a $250 million revolver, which had $31.5 million outstanding as of the end of last quarter.

While CVR Partners had one of the major credit rating agencies give its recent bond offering a "junk" rating, that doesn't mean the company's credit is in trouble. On the contrary, that rating is primarily due to the company's smaller size and the currently weak nitrogen market. Further, the company is backed by two financially strong investors that could come to its rescue if needed, which makes it a less risky investment than its credit rating would imply.