What: Shares of SodaStream International (NASDAQ:SODA) rose a heart-stopping 51.1% in May 2016, according to data from S&P Global Market Intelligence. At the core of the soda-machine maker's surge, you'll find a fantastic first-quarter report.

So what: The stock was already off to a nice start in May, rising a market-beating 7% before the earnings report. Then SodaStream more than doubled Wall Street's earnings targets alongside revenue 13% above expectations. Shares soared 25% higher over the next two days.

Another 10% surge followed at the very end of the month, when the company announced a system to make beer at home. It's not a full-blown brewery still, but more like a beer-flavored expansion of the traditional SodaStream drink-making tool. 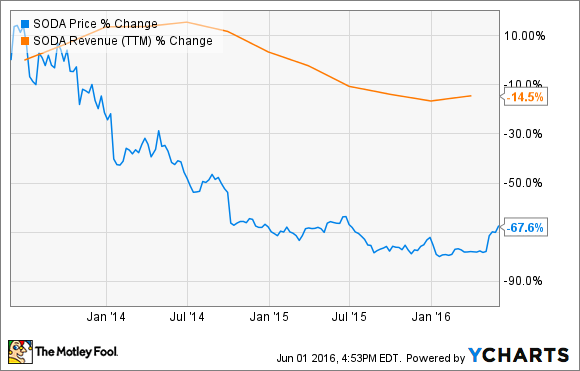 Now what: Do keep in mind that SodaStream came into May on a sour note. Share prices had been sliding inexorably lower since the summer of 2013, despite a steady drumbeat of positive earnings surprises.

The first-quarter report may have crushed analyst targets, but sales still declined 3.7% year over year while earnings slid 28% lower. It was more of a stabilization event than a surge into clear blue skies.

It is probably too early to declare a return to full health here. Investor enthusiasm notwithstanding, the company needs to show that its beer-making system is a good idea. In fact, the company must still prove beyond a reasonable doubt that the whole carbonated-drinks kit hasn't gone stale again. You do remember those machines being everywhere in the 1980s, right -- only to disappear for the next three decades?

I still don't see how this one-note business can stay relevant in the long run. In other words, the May surge was a rare break from that long-term decline, and I expect plenty more red ink in this company's future.