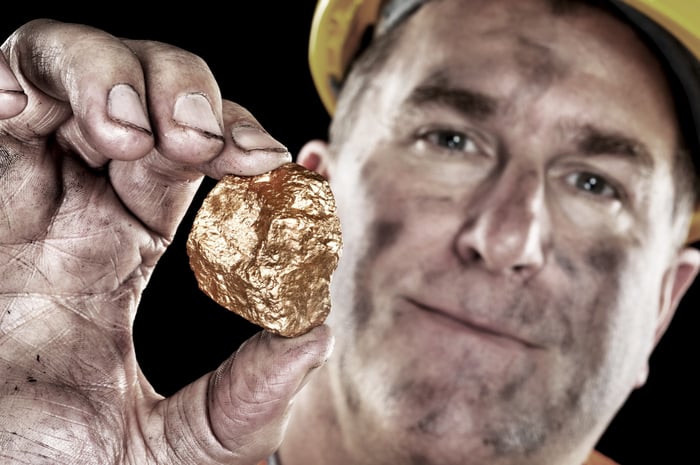 May was a rough month for precious metals investors, with the U.S. Federal Reserve not being subtle about that the fact that an interest rate hike was clearly on the table for the June Federal Open Market Committee meeting. The contingency was that U.S. economic data needed to remain strong in order for the Fed to consider hiking rates. If you recall, the Fed had laid out plans to boost lending rates four times in 2016 when the year began, but weaker-than-expected GDP growth has stymied those plans.

Earlier this morning, the U.S. Labor Department released the May jobs report, showing that the unemployment rate had dropped to its lowest level in a decade, at 4.7%. However, the entirety of this job creation came from a large reduction in the labor force participation rate. The key figure of the report, jobs creation, came in at a paltry 38,000 jobs. This was the lowest level we've seen since Sept. 2010. A weak jobs report could very well reduce the chances of a June rate hike, which is music to the ears of precious metal investors.

Why? Rising interest rate have two effects that tend to make gold and silver not as attractive. First, rising rates boost the yields on bonds, CDs, and a number of interest-bearing assets. Meanwhile, physical gold and silver don't pay a dividend. As lending rates rise, the opportunity cost of owning physical gold and silver rises as well. If, however, rates continue to remain low, then investors aren't giving up much to instead buy into the shiny yellow and silver metals, as well as their miners.

The other issue is that rising lending rates have the effect of pushing the U.S. dollar higher, and the dollar and gold tend to have an inverse relationship.

Following today's employment data, gold and silver absolutely soared. As of 3 p.m. EDT, physical gold was higher by $31 an ounce from yesterday's close, to $1,241. Meanwhile, physical silver galloped higher by $0.39 an ounce, to $16.35. These huge spikes higher had a big effect on the miners that produce these metals. Here are some of today's moves:

While rising metal prices are the prime catalyst for today's moves in these precious-metal miners, there have been ample fundamental improvements to support the idea that this recent rally is the start of something much bigger.

There are fundamental factors at work, too

Take Silver Standard Resources, which earlier this week closed on its deal to buy Claude Resources (OTC:CLGRF) in what was essentially an all-stock deal with a minute cash component. The addition of the Seabee Mine and Santoy Gap gives Silver Standard Resources access to around 75,000 ounces of added gold production annually, as well as a low-cost, high cash flow operation. With a more balanced production portfolio, as well as falling all-in sustaining costs (AISC), Silver Standard is looking more lustrous than ever.

Acquisitions aren't the only way precious metal miners have improved their financial standing. In essentially every company mentioned above, we've seen a concerted effort on cost-cutting to help reduce AISC and boost margins such that any tick higher in silver can potentially result in a profitable quarter.

Small-cap miner Great Panther Silver delivered one of the most impressive year-over-year AISC reductions we witnessed in the first quarter. It wound up reducing is AISC to $13.76 an ounce, all while boosting its gold production to nearly 5,600 ounces from the previous year. Endeavour Silver also reduced its AISC by 17% to $11.12 an ounce, mostly as a result of exploration suspensions at its Bolanitos and El Cubo mines. When costs are more amicable, Endeavour can restart the build-out of these mines in a more cost-efficient manner.

For other miners, it's all about record production numbers. Despite weakening prices over a four-year stretch, some miners chose to push forward and continue expanding into high ore grade recovery zones. For example, First Majestic Silver delivered a record 5.1 million silver equivalent ounces in Q1, the bulk of which came from a nearly 500% increase in the amount of gold it produced, and a 25% jump in ore processed. Likewise, Hecla Mining reported a record 4.64 million ounces of silver production in Q1, as well as almost 55,700 ounces of gold. The San Sebastian mine coming online provided the bulk of the lift in production for Hecla, and investors should keep in mind that this mine is just getting started.

As you can see, things are improving at a rapid clip for miners. Gone are the days of willy-nilly spending without a care in the world, and instead are efforts to mine only the highest ore grade and most profitable mines. Although gold and silver miners have been this years' top performers, it's quite possible their run has only just begun, especially if metal prices continue to head higher. As an investor who holds precious metal miners in my portfolio, I can honestly say I'm very much looking forward to what the next few years have in store for these industries.