John Legere wants to be loved.

The T-Mobile (NASDAQ:TMUS) CEO has acted like the Robin Hood of the wireless industry. His version of taking from the rich and giving to the poor has been to go after what he calls "the Duopoly," industry leaders (at least by customer count) Verizon (NYSE:VZ) and AT&T (NYSE:T).

Legere has attacked the big two by calling them out on practices that have helped make the wireless industry billions of dollars at the expense of customers. He has also given consumers an option by eliminating many of those once-industry-standard policies at T-Mobile. This has included dropping contracts and no longer charging overage fees, instead slowing down data speeds when consumers exceed their allotment.

The CEO has regularly shown open contempt for his rivals, mocking them in a Star Wars-themed blog post on May 4, 2016, that is pretty typical of the tone he takes when discussing AT&T and Verizon.

"Since the start, the Un-carrier revolution has been about fighting back against the Duopoly for wireless customers everywhere -- and making sure the Evil Twins can no longer abuse their customers or take them for granted," he wrote. "It's been about listening, telling it like it is and changing wireless for good."

These were moves designed to win over the public. It's populism that would make a Bernie Sanders campaign staffer proud and the latest annual telecommunication industry report from the American Customer Satisfaction Index suggest it's working [register to download the report here].

Which companies are winners and losers?

While the numbers are not overwhelming, T-Mobile did post the highest ACSI score of all the major carriers. Legere's company jumped  from a 70 in 2015 to a 74 this year on the 100-point scale. That's a 6% jump that had the carrier topping AT&T and Verizon, which both scored 71, and Sprint (NYSE:S), which brought up the rear at 70.

T-Mobile also outscored the industry average of 71, but it actually placed behind pre-paid carrier TracFone, a brand that may have strong appeal simply because it's a no-frills low-cost option.

That makes Sprint the company with the lowest customer satisfaction rating, but the carrier actually does have something to celebrate. Sprint may be in last place, but it posted the biggest improvement of all the carriers, raising its number by 8%. It's hard to say that being better at being the worst is a real victory, but it's at least something for the company to build on. 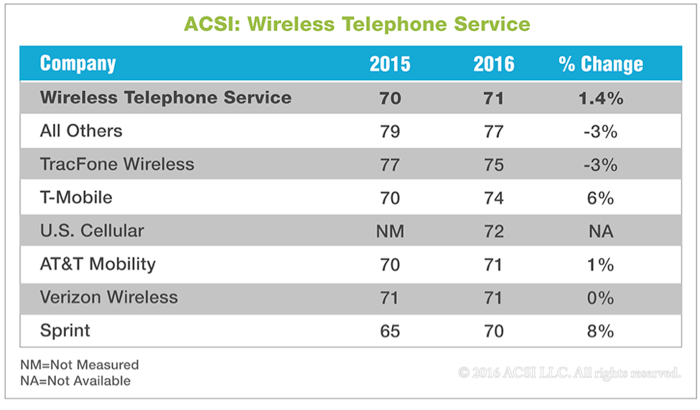 Meanwhile, T-Mobile got a win, but it's  a relatively small one given how much Legere emphasizes putting the customer first. The problem for T-Mobile may be that its rivals have slowly adopted some of its practices. Sprint, for example has dropped contracts and has an overage policy that mirrors T-Mobile's. AT&T and Verizon still charge overages, but even "the Duopoly" has eliminated most contracts while at least somewhat becoming more transparent when it comes to billing.

Legere has scored a victory, but to stay ahead and remain the most-liked of all the major carriers, T-Mobile needs to keep innovating and keep pushing back against its rivals. Robin Hood always has more starving people to feed and another tyrant to topple. There's strong reason to believe Legere can continue to lead his company in that fashion, but it's hard-won ground in a very competitive space.