Few stocks have the dividend history that Altria Group (NYSE:MO) boasts. Long-term shareholders have gotten decades' worth of dividend increases over time even as the tobacco company's share price has also climbed consistently. Those who track dividend stocks closely know that many companies have favorite times of year to boost their quarterly payouts, and Altria has traditionally made its announcements in the summer months. Should investors count on that holding true this year as well? Let's look more closely at Altria Group to see if it's likely to make a dividend move in the near future.

How Altria Group has kept its dividend smokin' hot

The consistency with which Altria Group has given shareholders increased dividend payouts makes the stock extremely attractive to dividend investors. Since 2008, the company has nearly doubled its quarterly dividend, with annual increases in the 6% to 10% range. The chart below suggests that Altria had a big dividend cut in the run-up to the financial crisis, but the downward move reflects the fact that the company spun off its international tobacco business that year. Therefore, even though its per-share quarterly payout fell, the proportional share of the payout that came from Altria's U.S. tobacco business remained stable and then continued to grow. That's the basis under which Altria can claim a 46-year streak of raising its dividend every quarter. 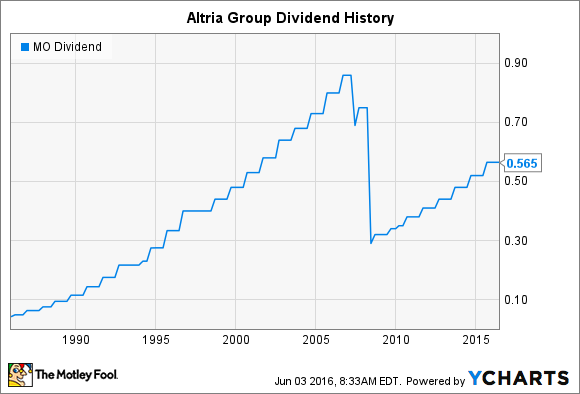 Altria's steady earnings growth has been the primary support for its matching regular dividend increases. The tobacco giant has been able to use its pricing power to boost overall revenue even in the face of a long-term secular decline in the popularity of smoking, and that strategy has also kept its bottom line growing as well. Although earnings growth was relatively sluggish at just 4% in 2015 compared to the previous year, it hasn't been uncommon for Altria to post double-digit percentage growth rates in net income. All in all, Altria has kept its payout ratio in a fairly stable range of  75% to 80% of earnings. That doesn't give the company a lot of additional capital to reinvest into its business, but Altria is a mature company that doesn't have the same internal growth prospects as a smaller upstart would.

A couple of factors could make things interesting for dividend investors in the near future. First, Altria holds a substantial minority stake in beer maker SABMiller, which is in the process of being acquired. If the purchase by Anheuser-Busch InBev goes through, Altria will get a better-than-10% stake in Anheuser-Busch, but it will also receive roughly $2.5 billion in cash. The company could end up using a good chunk of that cash to repurchase shares, but a special dividend isn't out of the question.

Altria's management remains committed to keeping the company's dividend healthy. As CFO Billy Gifford said at the company's most recent quarterly conference call, "We continue to make returning cash to shareholders a priority, paying over $1.1 billion in dividends and repurchasing $168 million in shares" during the quarter. CEO Marty Barrington added more recently that "the way that we think about capital deployment is principally to make sure that we are paying the dividend."

Based on Altria's past practices, it's reasonable for investors to expect a similar-sized boost in the dividend to what the company got last year, with an August announcement leading to a September payment. A $0.045 increase would bring the quarterly payout to $0.61 per share, pushing the dividend yield back up toward 4% and once again showing that Altria remains a powerful dividend stock for any income investor's portfolio.