Every quarter for the past 16 quarters, International Business Machines (NYSE:IBM) has reported a year-over-year revenue decline. The company's efforts to transform itself into a cloud and cognitive computing powerhouse have been making progress, but the headline numbers spin a tale of a company in disrepair.

Those numbers don't tell the whole story. Here are three things that investors need to know about IBM.

IBM derives more than half of its revenue from countries outside the United States. Geographic diversification is a major positive; but a side effect is that changes in currency exchange rates can wreak havoc on IBM's results. Even if IBM grows revenue in a particular market in local currency, translating that revenue into U.S. dollars can transform that growth into a decline.

That's essentially what happened in 2015, when the U.S. dollar strengthened against many foreign currencies. IBM's reported revenue slumped 12% last year, but adjusted for both currency and divestitures of under-performing businesses, revenue fell by just 1%. This large discrepancy has been a trend for quite some time. 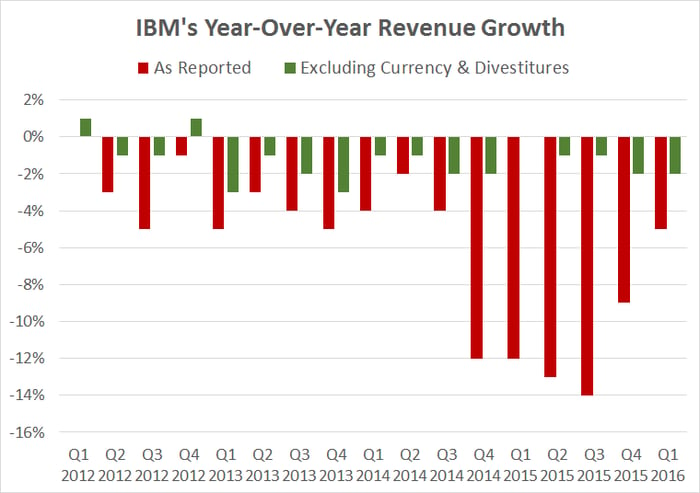 Currency will continue to have a major negative impact in 2016, in part due to currency hedges that are rolling off. IBM expects its pre-tax profit to be negatively impacted by more than $1 billion in 2016, thanks to currency.

What's the takeaway from all of this? The reported numbers don't reflect IBM's true operational performance. Revenue is declining even on an adjusted basis, but those declines are much smaller than the double-digit drops that made for dire headlines last year.

Part of IBM is growing fast

As a whole, IBM's revenue isn't growing. But the company's strategic imperatives, comprised of a set of businesses in which IBM is investing heavily, are growing rapidly.

During 2015, strategic imperative revenue rose 26%, adjusted for currency, representing 35% of IBM's total revenue. Analytics brought in $18 billion of revenue, up 16%. Mobile revenue of $3 billion more than tripled, security revenue of $2 billion rose 12%, and social revenue of $1 billion jumped 21%. Cloud revenue, which overlaps to a degree with the other categories, grew 57%, to $10 billion.

This rapid growth means that the rest of IBM's business is shrinking. During 2015, revenue from IBM's other businesses, which made up about two-thirds of revenue, declined by 11%. Part of this decline is the result of IBM shifting resources toward high-growth areas. During the past three years, the company has invested, organically or through acquisitions, $6 billion in analytics, $7 billion in cloud computing, and $3 billion in mobile, social, and security.

IBM's long-term goal is to return to low-single-digit revenue growth, mid-single-digit pre-tax income growth, and high-single-digit EPS growth. The company's not there yet, and it may still be a while before strategic-imperative growth counteracts declines elsewhere. But IBM is clearly making progress shifting its business toward high-growth, high-value areas.

The market doesn't think IBM will ever grow again

IBM expects to earn at least $13.50 per share in operating EPS this year, a number that excludes acquisition and retirement-related charges, but includes things like stock-based compensation that many technology companies conveniently leave out. That's down considerably from $14.92 in 2015; but currency is responsible for most of the decline.

Shares of IBM have recovered since hitting new five-year lows during the stock-market plunge of early 2016, but the stock still trades at just 11.3 times IBM's earnings guidance. That valuation is pessimistic, and it assumes that IBM will produce little-to-no growth going forward. For the sake of comparison, the S&P 500 currently sports a PE ratio of roughly 24.

Of course, there's a chance that IBM's transformation fails to reinvigorate growth, dooming the company to permanently depressed earnings. That's the biggest risk investors face with IBM. But a bargain valuation gives investors a sizable margin of safety, and a 3.6% dividend yield is a nice bonus.