Fitness tracking devices are on the rise, and both Fitbit (NYSE:FIT) and Garmin (NYSE:GRMN) are poised to potentially benefit from this trend. But which stock is a better bet for investors looking to capitalize on this fast-growing and nascent product segment? More importantly, which is the better stock overall? 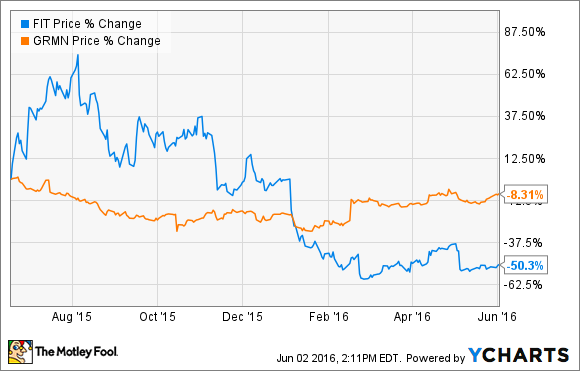 To analyze their investment prospects, let's compare the two companies head-to-head on a few key metrics.

Fitbit is the clear winner when it comes to growth, with revenue up 108% in the trailing 12 months. This compares to Garmin's 0% growth during the same period.

Trailing-12-month revenue growth, however, doesn't provide an accurate picture of the two companies' growth trajectories. First, investors should realize that Garmin's revenue growth has improved recently, with the company reporting 7% year-over-year growth in its most recent quarter. Second, it's worth emphasizing that Fitbit's 50% year-over-year revenue growth in its most recent quarter is well below its 108% growth in the trailing 12 months. This highlights just how rapidly Fitbit's growth rates are decelerating.

Still, even after considering these caveats, Fitbit comes out on top when it comes to growth.

Fitbit's higher price-to-earnings ratio of about 38, compared to Garmin's ratio of 17, implies investors anticipate more sustained high levels of earnings growth ahead for Fitbit than for Garmin.

While the two companies' trailing-12-month EPS growth suggests that Garmin deserves the higher price-to-earnings ratio, more recent EPS trends have Fitbit growing its bottom line faster. Consider the two companies' reported EPS growth in Q1, for instance. Garmin's EPS increased a meaningful 31% and Fitbit's soared 340%. And the difference in their non-GAAP EPS growth was also notable: Fitbit's first-quarter non-GAAP EPS was up 170% compared to the year-ago quarter, and Garmin's EPS declined 11% during the same period.

Overall, Fitbit stock's fundamentals do a pretty good job of characterizing the stock as a better buy than Garmin. But where Fitbit arguably stands out the most is its comparative market advantage over Garmin.

Fitbit's sales are concentrated in fitness tracking devices, giving the company greater exposure to the burgeoning market. Garmin, on the other hand, only derives about 16% of its sales from the fast-growing product category, with other products diversified across devices in auto, outdoor, aviation, and marine markets.

Fitness tracking devices are growing in popularity with consumers rapidly. Already, more than one in 10 U.S. consumers own either a fitness band or smartwatch, according to a recent study by Kantar Worldpanel. Also, three out of four of these devices are fitness bands, according to Kantar. Fitbit, of course, dominates the Fitness band market, "capturing 61.7% of the US installed base" of total wearable devices in the market -- and an even larger share of fitness bands, Kantar asserts.

Going forward, therefore, Fitbit's dominance in its market positions the company to grow sales faster than Garmin. Combining Fitbit's recent growth, valuation, and leading position in a rapidly growing market, I'd place my bets on Fitbit stock over Garmin.