Is silver really in such short supply that not only could it double in value from its current price, but triple or even quadruple? First Majestic Silver (NYSE:AG) CEO Keith Neumeyer says you would be crazy to think silver will be trading at $30 or $50 per ounce within the next few years. Nope, instead he believes silver will hit $140 per ounce, a ninefold increase from where it stands today.

The notion that silver could rise by so much seems fantastical, particularly since the metal has never hit $50 per ounce, but Neumeyer isn't just some crystal-ball gazer pulling numbers out of the air. As head of the second-biggest silver miner in Mexico, the country that produces more silver than anywhere else in the world, he has some insight into the forces moving the metal. 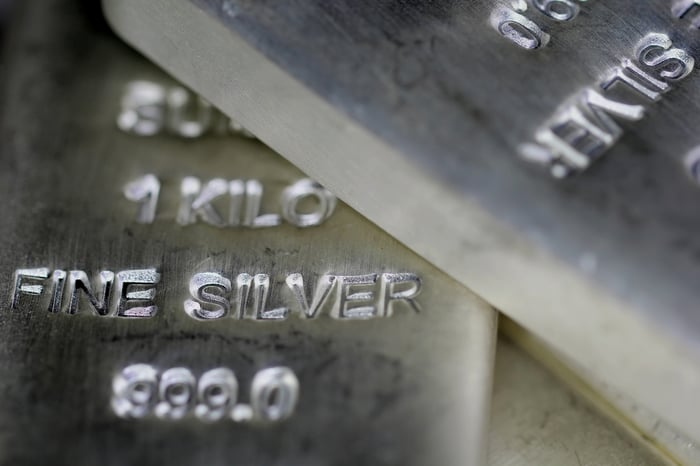 First Majestic is one of a handful of senior miners producing more than 10 million ounces of silver annually, a rarified group that includes Pan American Silver (NASDAQ:PAAS), Coeur Mining (NYSE:CDE), and Fresnillo.

In an interview with Bloomberg News, Neumeyer says there are some very good reasons why he expects the gray metal to go stratospheric:

There seems to be some basis for what Neumeyer is saying. In the heady commodities rally that's taken shape in 2016, silver has leapt to the forefront of performance among precious metals, surpassing gold with a near 15% gain year to date (it was up over 25% at one point in late April). Neumeyer also says his triple-digit silver price forecast is predicated on the price of the yellow metal not moving, but he doesn't see that as likely over the long haul.

Indeed, in a follow-up interview with Future Money Trends, he says $10,000 per ounce gold is not out of the question, which would suggest silver hitting $1,000 per ounce.

How high is high?

OK, this does seem like crazy talk, but the rationale for his belief is the world is increasingly using gadgets like mobile phones and flat-panel TVs that rely upon silver for its conductivity. Neumeyer notes only gold surpasses silver in its ability to conduct electricity, but its lofty price makes it prohibitive to use.

According to the market researchers at Gartner, mobile phones will grow 7% globally in 2016, to over 1.9 billion units, and will climb to more than 2 billion units by 2018, while Future Market Insights says the market for flat-panel displays will increase at a compounded 5.8% rate through 2020.

And Bloomberg reports that when you add in the demand from investments, coins, and inventories necessary to settle trades, silver has been in short supply for over 15 years. Yet as the price of silver has fallen, producers have been forced to cut back on production.

Pie in the sky?

So Neumeyer's prediction might not be as far-fetched as it seems, even if he remains something of a lone voice. On average, analysts only anticipate silver trading in the low $20s per ounce by 2019, and that's because, although there are no easy substitutes for silver, its low cost has meant there's been no need to even look. Should prices spike as Neumeyer suggests, there would be a mad rush to either produce more or find substitutes.

That happened in the market for rare-earth minerals when China suddenly imposed controls on their export. As the country is virtually their only producer, the restriction caused prices to rise astronomically. But not only did more mining suddenly occur for them as miners wanted to cash in on the potential profits, substitutes quickly emerged. Toyota and General Motors began making cars with induction motors rather than with rare-earth magnets; General Electric developed wind turbine generators that relied less upon rare-earth permanent magnets; and W.R. Grace offered fluid catalytic cracking catalysts that contained fewer rare-earth components. Just as quickly as they rose, prices of rare-earth minerals cratered.

Even so, while there's plenty of reason to suspect silver's price will be rising in the future, getting from $16 per ounce to triple digits in three years' time seems implausible, though it may still be a better bet than oil.