After another failure to agree on a coordinated oil policy, it's clear that the OPEC we once knew has ceased to exist.

For more than five decades OPEC has ruled the oil market with an iron fist. It decided how much oil to supply to the market, which would all but guarantee a fair price for its members. However, the first warning sign that the mighty OPEC had started to lose its grip on the oil market showed up in late 2014, when it broke from its previous practice of protecting a fair market price for oil by instead focusing on protecting its share of the oil market. Now, after two failed meetings at which the organization couldn't come to an agreement on a coordinated effort to stem the oversupply, it has become clear that the OPEC the oil market once knew and feared is no longer in existence.

No longer in control

For decades OPEC had controlled the market and its members through quotas, which were the maximum output levels each member country was allowed to produce. That was intended to keep the oil market well supplied, but not so well supplied that it had a negative impact on the price. However, with the shift from price protection to market protection, OPEC relaxed its practice of policing quotas. As such, many of its members have routinely exceeded their production quotas in recent months, with OPEC's production often as much as 2 million barrels per day above its 30-million-barrel-a-day output ceiling.

With this latest failure it has become clear that OPEC is no longer able to meet its objective to "co-ordinate and unify petroleum policies among Member Countries, in order to secure fair and stable prices for petroleum producers." That, in effect, signals its demise as an entity that can drive the oil market. It is a demise that has been made clear by the fact that the price of crude barely budged after each of its past two failed meetings.

Cause of death: greed and American ingenuity

OPEC's decision in late 2014 to back off on protecting oil prices stems from its desire to control a large enough share of the oil market to be relevant. Those market-share concerns were stoked as OPEC was starting to lose share in the oil market, due in part to the emergence of U.S. shale production. In fact, it was also losing what was once its top customer: 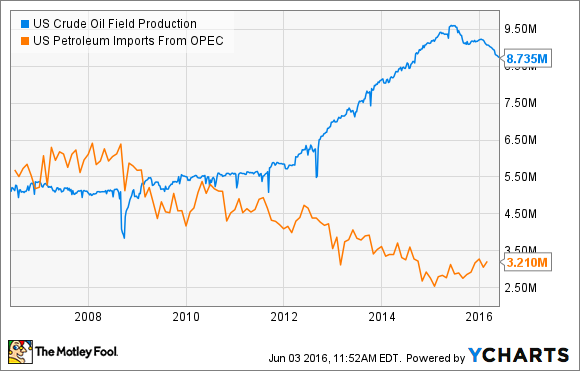 As that chart shows, the surge in U.S. oil production directly displaced OPEC's oil, with its exports to the U.S. falling by more than half.

Given that this production surge was fueled by triple-digit oil prices, OPEC reversed course and pumped at nearly max capacity in order to impair this upstart rival. While that has clearly worked with U.S. imports from OPEC rising as U.S. production declines, it has created a longer-term problem for OPEC, which is the fact that shale production no longer needs triple-digit oil to thrive.

Instead, thanks to falling costs and some good old American ingenuity, shale drilling's breakeven point has plummeted. Wells that once needed oil over $75 a barrel to break even are now doing so at as little as $30 a barrel. This has come thanks to a combination of efficiency and productivity gains as well as technological improvements.

EOG Resources (EOG -0.10%) is a prime example of this. The company is now getting 95% more oil per lateral foot on a horizontal well than just two years ago. Meanwhile, EOG Resources' completed well costs dropped by as much as 42% in the Permian Basin and 30% in the Bakken, with two-thirds of these costs savings estimated to be sustainable at higher oil prices. Furthermore, not only does EOG Resources have more than a decade of what it terms "premium drilling locations," which are profitable to drill at a $30 oil price, but the company's enhanced oil recovery projects in the Eagle Ford shale have nearly doubled the recovery factor of legacy wells, while being solidly profitable at $40 a barrel.

Meanwhile, global producers like ConocoPhillips (COP -2.87%) have shifted their focus to become much more flexible. ConocoPhillips can ramp its production up or down in response to oil-market needs thanks to the short-cycle nature of shale wells. Furthermore, the company continues to lower its costs through efficiency gains, which has it well positioned for a future likely driven by greater oil price volatility.

In a lot of ways U.S. shale has become the new swing producer in the oil market, which was the role that OPEC used to play. As such, it no longer seems to matter if OPEC freezes, lowers, or increases its output, because market-driven factors will determine whether companies like EOG Resources and ConocoPhillips increase or decrease investments that will add or hold back production growth.

OPEC had a great run, but it would appear that it has become irrelevant in the oil market. In some ways it caused its own demise, because its decision to push down oil prices caused American producers to reduce their costs to survive. Many did just that, with a growing number of shale plays now globally competitive at lower oil prices. This is putting the American oil industry in position to overtake OPEC as the new swing producer in the oil market.