What: Despite the news this past month that FMC Technologies (NYSE:FTI) will merge with engineering and construction firm Technip (NASDAQOTH: TKPPY), shares of FMC tumbled 11%, as the entire energy industry -- especially those with heavy ties to offshore production -- continues to struggle.

So what: Back on May 19, both Technip and FMC Technologies announced that they would be coming together in an all-stock deal. Combined, the two companies will generate about $20 billion in revenue annually. One thing to keep in mind is that those revenue figures are from fiscal 2015, which wasn't exactly the most robust year for oil and gas equipment manufacturers and service providers. 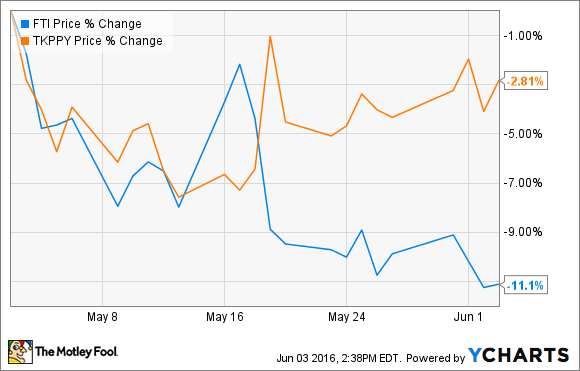 The deal between the two companies is very reminiscent of the recent deal that Schlumberger (NYSE:SLB) completed to acquire subsea equipment manufacturer Cameron International, in the sense that it's the combination of a major service provider with a specialty equipment manufacturer. The goal of these deals is that both Technip and Schlumberger can offer a more complete design that's easier to implement since it will be able to package both the services and equipment into a single bid.

Even though the market should welcome deals like this, as many think some consolidation is needed, it wasn't enough to shake investors' concerns about the continued decline in offshore activity in oil and gas. All the consolidation in the world won't change the fact that there is simply less work available for these service companies, and fewer jobs to bid on for equipment manufacturers. Until we see a significant pickup in offshore activity, chances are Wall Street will continue to punish this stock.

Now what: Both the FMC Technologies/Technip and Schlumberger/Cameron International tie-ups are a unique move in the oil and gas world, and it will be worth watching to see how this pans out. From an investment standpoint, though, the recent declines at FMC Technologies and Technip will continue until we see an increase in offshore drilling demand, and we could still be a way away until that comes to pass. For the time being, it's probably best to stay on the sidelines and see how this new business model for oil service companies plays out.