Auto parts retailer Advance Auto Parts Inc. (NYSE:AAP) has serially disappointed investors in the last year, while peers such as AutoZone, Inc. (NYSE:AZO) and O'Reilly Automotive Inc. (NASDAQ:ORLY) have powered ahead in terms of operational performance and stock price.

Advance Auto parts is having difficulty integrating an acquisition that was supposed to transform the company's fortunes. Meanwhile, senior management have left and company guidance has been slashed for 2016. Is it madness to consider buying the stock? I don't think so, and here's why. 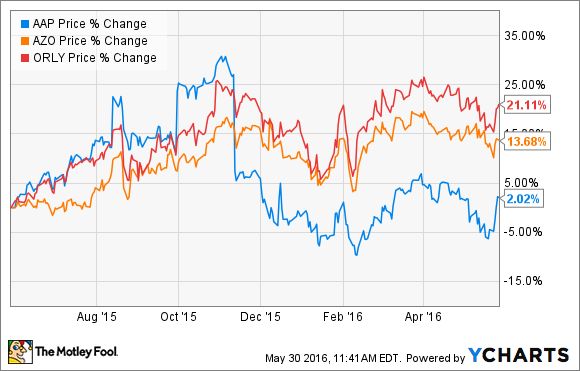 I see three reasons to be positive on the stock:

The auto parts market distinguished itself in the last recession by producing same-store sales growth throughout. The reason is simple: When times are hard, consumers are reluctant to purchase new cars, and older cars mean more demand for replacement parts. Not only is the industry relatively recession-proof, it's also experiencing favorable secular trends as well. For example, the average age of the U.S. automobile has continued to rise despite the post-recession recovery in auto sales. 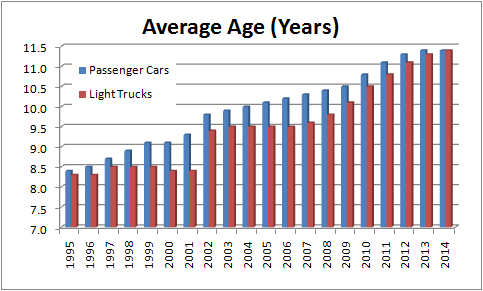 Moreover, as you can see below, although Advance Auto Parts' same-store sales growth has lagged its peers -- largely because of its difficulties integrating Carquest -- its peers are still reporting good growth -- an indication that the market remains favorable. 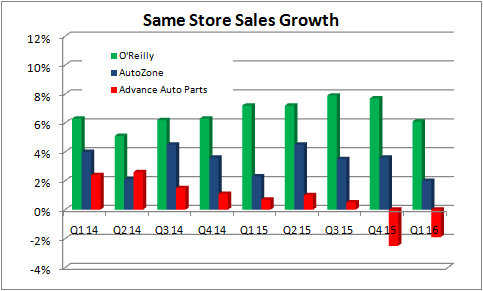 Also, consider that Advance Auto Parts has, in common with O'Reilly Automotive, a well balanced mix of faster-growing but lower-margin Do It For Me (DIFM) sales and Do It Yourself (DIY) sales -- AutoZone sees around 80% of its sales from the DIY market.

What's more, the stock is relatively cheap compared to its peer group. 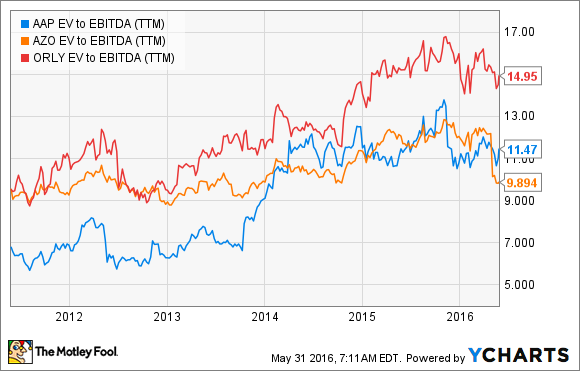 In addition, the company has an opportunity to play catch-up to its peers in terms of generating free cash flow from its assets and operating margin. Incidentally, note the kink in O'Reilly's metrics in 2008 as it dealt with integrating the CSK acquisition; in a similar way, Advance Auto Parts's metrics dipped following the 2013 acquisition of General Parts International (owner of Carquest and Worldpac). 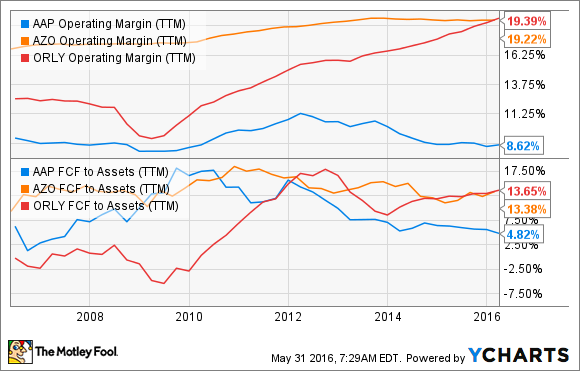 The stock is cheap, at present, for a reason. The integration has proven a lot tougher than expected (see the same-store sales chart above), and following a disappointing first-quarter results presentation, management announced it was no longer targeting $500 million in free cash flow and adjusted operating income margin of 12% for 2016.

Indeed, on the first-quarter earnings call, newly appointed CEO Tom Greco was candid on the issues: "We continue to experience shortfalls on execution, driven by availability and service levels." Clearly, he has much work to do, but there are three reasons to believe current management can turn things around.

First, a new management usually means a new approach. Greco's appointment in April follows the departure of Darren Jackson in January. In addition, activist investor and CEO of Starboard Value Jeffrey Smith is now the Advance Auto Parts Chairman, and the current CFO has agreed to leave the company.

Smith is well known for his deep-value investing activism, and Greco's 30 years at Pepsico, Inc. (NASDAQ:PEP) (as CEO of Frito-Lay North America) stand him in good stead. Pepsico's "Power of One" strategy (whereby snacks and beverage are marketed and promoted together) requires extensive awareness of inventory management, logistics & distribution, and an integrated approach to in-store selling -- all qualities that will serve Greco well as he comes to grips with Advance Auto Parts's dual-store (DIY & DIFM) strategy.

Second, given that Greco as been on the job for little more than a month, it would not be surprising if he has low-balled expectations in predicting full-year same-store sales guidance of negative 3% to negative 5%.

Third, as discussed previously, the experience of O'Reilly Automotive shifting to a dual-store model is a good marker for what Advance Auto Parts can achieve.

All told, the investment proposition is an attractive one, provided the new management can turn things around. On a risk/reward basis, I think the stock is a good value for investors looking for a deep value stock whose prospects are favored by attractive end market growth. Now the new management needs to execute, because if it does, the stock could soar.