The investment idea behind buying Advance Auto Parts (NYSE:AAP) is based on the belief that the company can play catch-up with rivals such as AutoZone (NYSE:AZO) and O'Reilly Automotive (NASDAQ:ORLY). It's an attractive proposition because Advance currently trades at a substantial discount to its peers. In my view, closing the gap could result in a near doubling of the stock price. But can Advance really achieve its aims? Here is what you need to know before buying the stock.

In a nutshell, Advance's aim should be to replicate O'Reilly Automotive's improvements of the past few years. O'Reilly is a good benchmark because it has a far higher proportion of do-it-for-me (DIFM) sales compared with, say, AutoZone. In addition, O'Reilly built up its DIFM business following the acquisition of CSK Automotive in 2008. CSK wasn't an established DIFM retailer -- on the contrary, its primary end market was DIY, but O'Reilly built out a distribution network allowing the purchased stores to pursue a dual DIY and DIFM market strategy.

In comparison, Advance's early 2014 acquisition of General Parts International, owner of Carquest and Worldpac, immediately gave the company more DIFM sales -- General Parts had 80% of its sales in the DIFM market. The key point is that Advance is following O'Reilly's dual-market strategy, reaching the same endpoint from a different angle.

A breakout of each company's sales:

There are three key distinctions between DIFM and do-it-yourself (DIY).

Where O'Reilly leads
To understand what Advance needs to do, let's look at what O'Reilly has done and, in passing, look at where Advance has been left behind in recent years. First, I'll start with the EBITDA margin.

O'Reilly's margin took a hit after the 2008 acquisition of CSK, and similarly Advance's has come under pressure as it integrates Carquest and Worldpac. Clearly, creating a dual-market model doesn't come without teething problems. However, O'Reilly's margin has improved dramatically from 2010, and Advance's management is aiming for an operating margin equivalent to 15% EBITDA margin by 2017. 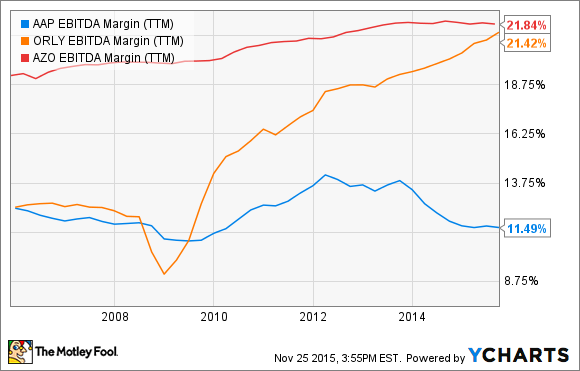 Second, there's no doubt that O'Reilly's purchase of CSK led to increased capital spending -- partly on building out a distribution network. 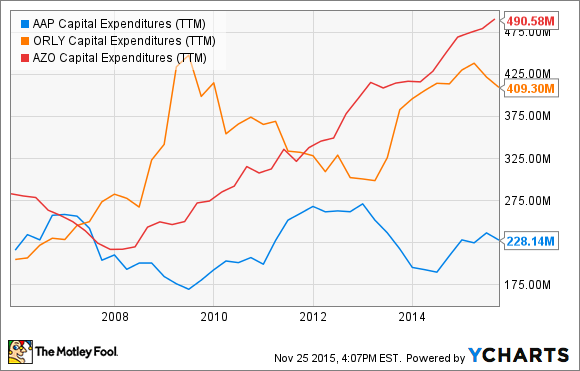 However, the extra investment was worthwhile, as O'Reilly's return on invested capital (ROIC, which is net operating profit less taxes, divided by invested capital) has increased markedly, while Advance's has floundered. AutoZone's ROIC increased because of the post-recession popularity of DIY. 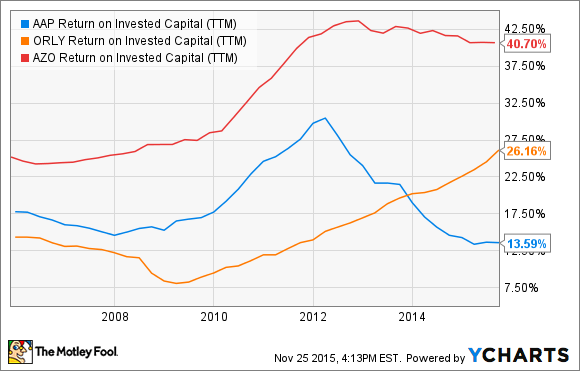 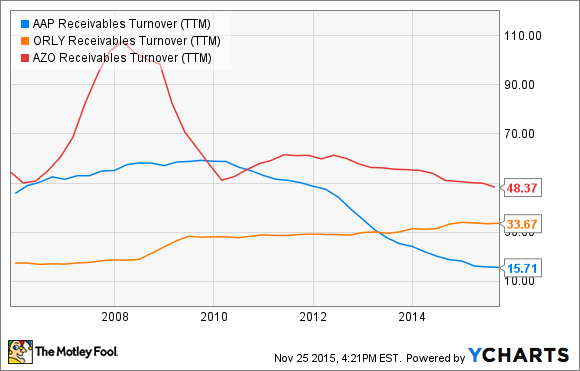 Valuation matters
The preceding analysis goes some of the way toward demonstrating the feasibility that Advance can improve its operational metrics in building out a dual-market model -- not least because O'Reilly already did it. Moreover, if Advance hits its 12% EBIT margin target (around 15% EBITDA margin), the stock will look cheap.

Analysts have revenue coming in at $9.94 billion in 2016, and a 15% EBITDA margin would generate $1.49 billion in earnings before interest, taxes, depreciation, and amortization. Based on the current enterprise value (EV, which is market cap plus net debt) of $13.14 billion, the stock would then trade at a forward EV/EBITDA multiple of 8.8 -- O'Reilly currently trades on a multiple of almost 1.9 times this figure, suggesting Advance's stock could perhaps double in the future. 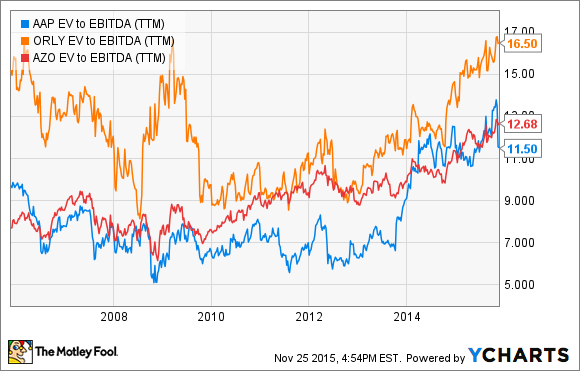 All told, there's no guarantee that Advance will hit its targets, and recent results have demonstrated its difficulty in integrating Carquest. However, the case for the stock is attractive, and O'Reilly's experience suggests Advance could achieve its aims.