Dividend investors would be wise to focus not just on a stock's current yield, but also on the long-term growth potential of its dividends. That's because strong businesses that consistently raise their dividend payouts reward shareholders with a steadily rising income stream that essentially equates to a raise every year. And, well, who doesn't like a raise?

There are other reasons to value dividend growth so highly, and they're well supported by research. For instance, a study by C. Thomas Howard published in Advisor Perspectives in 2011 found that for every percentage point a stock's yield rises, its annual return increases by 0.22 percentage points if it's a large-cap, 0.25 if it's a mid-cap, and 0.46 if it's a small-cap. Even better, Howard found that dividend-growing stocks outperformed dividend cutters by 10 percentage points per year from 1973 to 2010 and beat both flat- and no-dividend stocks. The icing on the cake is that Howard showed that this outperformance came with a third less volatility. Higher returns, less volatility-induced stress, and a steadily growing income stream -- three powerful aspects of dividend growth investing that can help you grow your wealth.

With that in mind, here are two outstanding businesses that are likely to grow their dividends substantially in the years ahead.

A tasty combination of growth and income

Steakhouse chain Texas Roadhouse (NASDAQ:TXRH) offers a little something for everyone. Income-hungry investors can savor its fast-growing dividend, while growth-focused investors will appreciate its impressive share price appreciation. 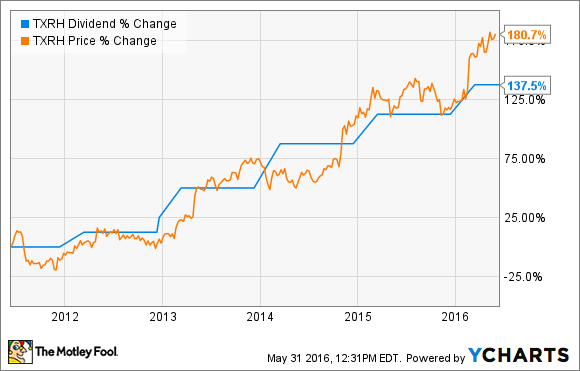 Texas Roadhouse compounds its shareholders' wealth by reinvesting its cash flow into new restaurant openings, which generate more cash, which fund new store openings -- it's a virtuous cycle that can create a fortune for investors over time. Of course, that's true only if Texas Roadhouse can remain popular among its patrons. Fortunately, that certainly appears to be the case, as Texas Roadhouse was named the No. 1 full-service restaurant last year, according to the American Customer Satisfaction Index. Moreover, the company has also delivered 25 consecutive quarters of positive comparable-restaurant sales growth, giving further evidence that Texas Roadhouse's affordable menu and fun atmosphere continue to resonate with consumers.

Looking forward, management believes the U.S. alone could support as many as 800 Texas Roadhouse locations. With currently less than 500 total restaurants and plans to open about 30 new stores annually, Texas Roadhouse should have at least a decade of solid domestic growth still to come. Combined with an intriguing international franchise opportunity and promising early-stage restaurant concepts Bubba's 33 and Jaggers, Texas Roadhouse gives investors many ways to win in the years ahead.

High growth in an unlikely place

Casey's General Stores (NASDAQ:CASY) owns and operates more than 1,900 gas station/convenience stores in 14 midwestern states. While it may not operate in the most exciting industry, Casey's returns and dividend growth have been anything but boring. 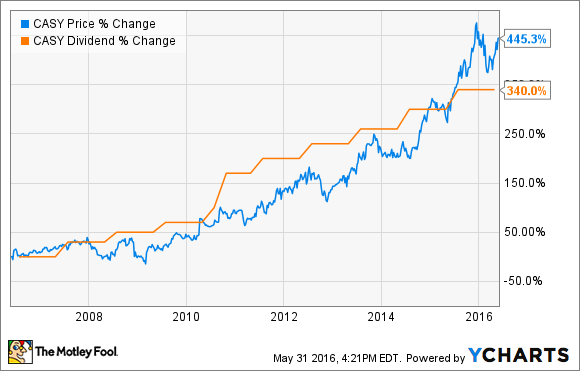 The company has an interesting strategy that has helped it achieve these impressive results: Rather than concentrating on the most highly populated areas, Casey's focuses on smaller communities that typically don't have a lot of options for gas or food. In fact, nearly 60% of Casey's stores are in towns of under 5,000, and more than 80% are in communities of less than 20,000. While that lowers the amount of potential customers Casey's can serve, it also tends to come with a lot less competition. This focus on underserved communities has allowed Casey's to carve out a successful niche in an otherwise extremely competitive market.

To further strengthen its competitive positioning and add more value to the communities it serves, Casey's has expanded its convenience store offerings to include more grocery and prepared food items. The company has also rolled out pizza delivery at more than 300 stores and converted 700 locations to 24-hour formats. Combined, these moves are helping drive same-store sales growth and improve profit margins.

Rising sales and improving profitability are a powerful formula for long-term success, and that's certainly been the case for Casey's. But with locations in only 14 states and plenty of rural communities still left underserved, this growth story has plenty of gas left in the tank. As such, dividend-growth investors may wish to consider picking up some shares of Casey's General Stores.