This disruptive little eyewear maker is now worth $1.2 billion.

When investors discuss hot start-ups, they often mention fast-growing tech companies like Xiaomi, Snapchat, or Uber. Fewer people probably mention eyeglass retailer Warby Parker, which was valued at $1.2 billion after its last round of funding. That makes Warby the second most valuable e-commerce start-up in America and one of the few e-tail start-ups to top the $1 billion "unicorn" mark without being acquired. Let's take a closer look at this six-year-old start-up, how it makes money, and how it measures up to publicly traded rivals.

Warby Parker was founded by four students -- Neil Blumenthal, Andrew Hunt, David Gilboa, and Jeffrey Raider -- in the Wharton School of the University of Pennsylvania's Venture Initiation Program six years ago. The company sells affordable, custom-designed eyeglasses that cost less than $100. By designing the frames in-house, Warby Parker avoided licensing fees, which could reach 15% of the wholesale cost of the glasses. By only selling its glasses online, it avoided brick-and-mortar markups, which would have doubled or tripled the final price. 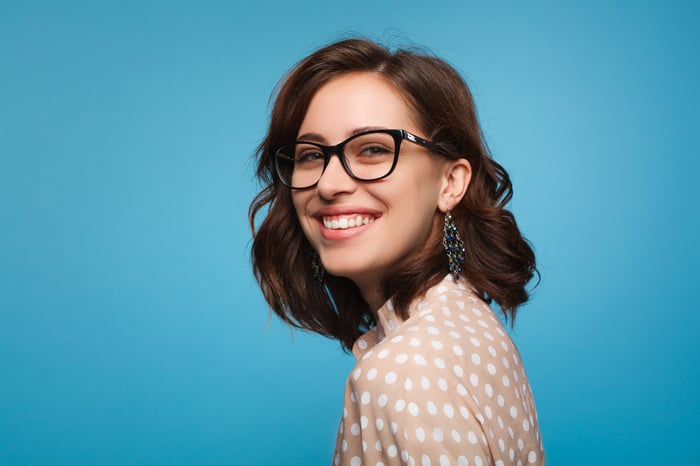 Flattering coverage in Vogue, Elle, Esquire, and GQ -- which dubbed Warby the "Netflix of eyewear" -- generated lots of publicity for the company with minimal advertising. The company also introduced a "Home Try-On" program, which lets customers pick five frames online that are shipped to them free of charge to be tried on at home. It also lets customers upload a selfie to "virtually" try on glasses. This unique business model resonated with younger "cheap chic" customers, and disrupted the time-consuming and pricier process of trying on and ordering glasses at a third-party vendor like Luxottica's LensCrafters.

Warby Parker then opened a handful of brick-and-mortar showrooms across the U.S. to spread mainstream awareness of its brand. In 2013, it started opening full retail shops, which employed roughly half of its workforce of around 500 last year. The company also announced plans to build its own point-of-sale system, which would enable it to better track and analyze customer relationships.

How much money does Warby make?

Warby Parker's annual revenue reportedly rose from $35 million in 2013 to over $100 million in 2015, but it isn't profitable yet. Being valued at around 12 times sales without any profits doesn't bode well for an IPO, which was rumored ever since its valuation crossed the half-billion mark. However, Warby's founders have stated that they're in no hurry to go public. 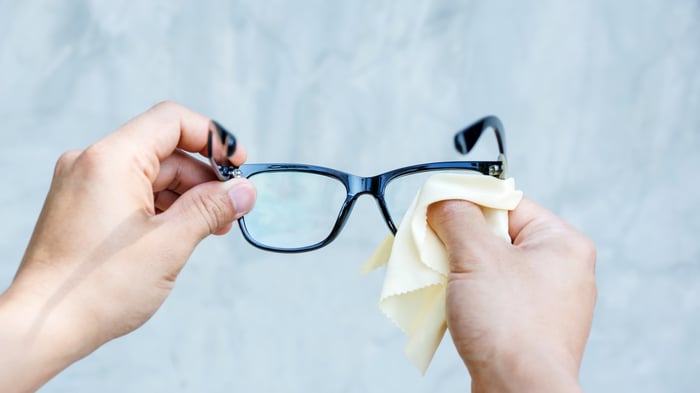 In an interview with Inc. last year, co-founder Neil Blumenthal stated that "it's not intelligent to grow in the short-term at the expense of the long-term potential." Indeed, Warby Parker's valuation looks lofty compared to Luxottica -- which dominates the eyewear market with its Oakley, Ray-Ban, and licensed brands, as well as its retailers LensCrafters, Pearle Vision, and Sunglass Hut. Luxottica's revenue surged 17% on a constant currency basis to 9 billion euros ($10.1 billion) in 2015, but it currently trades at less than three times its trailing-12-month sales.

Nonetheless, David vs. Goliath comparisons between Warby Parker and Luxottica persist. But instead of directly competing against Luxottica, Warby has carved out a niche that the Italian giant can't touch. Luxottica's eyeglasses cost an average of $300 but can go up to $4,000, and it licenses a wide variety of well-established brands like Chanel, DKNY, and Ralph Lauren. Meanwhile, Warby's glasses are much cheaper and seem popular with younger, more tech-savvy customers. That's probably why Alphabet's Google tapped it to create more fashionable Google Glass frames in 2013. Glass ultimately flopped, but the partnership likely boosted awareness of Warby Parker's brand among younger gadget enthusiasts.

But is Warby Parker built to last?

Warby Parker has gotten off to a solid start, but it's still a young company that hasn't figured out how to turn a profit with its innovative business model. Warby will have to address that challenge if it goes public, but the disruptive little eyeglass retailer could still have plenty of room to evolve and grow before it does so.