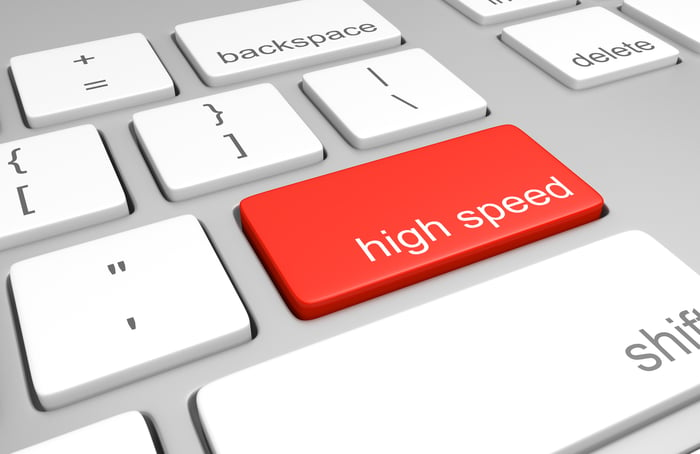 Frontier (OTC:FTR) might be the least-liked broadband provider according to a recent American Customer Satisfaction Index report, but the company does not, and will not, be doing one thing consumers hate, according to its CEO.

The embattled Internet provider, which just doubled in size after acquiring systems in California, Texas, and Florida from Verizon, does not cap how much data its customers use and CEO Daniel McCarthy said at a recent conference that it won't.

"We have not really started or have any intent about initiatives around usage-based pricing," he told investors at the June 1 Bernstein Strategic Decisions Conference. "We want to make sure our product meets the needs of customers for what they want to do, and it doesn't inhibit them or force them to make different decisions about how they're going to use the product."

That's a very different tack than the one being taken by AT&T (NYSE:T) and Comcast (NASDAQ:CMCSA), both of which have begun capping data for their subscribers. Comcast CEO Brian Roberts likened his company's data-use policy to the way people are charged for gas or electricity in a 2015 appearance.

"Just as with every other thing in your life, if you drive 100,000 miles or 1,000 miles you buy more gasoline. If you turn on the air conditioning to 60 vs. 72 you consume more electricity," Roberts said at Business Insider's 2015 Ignition Conference. "The same is true for [broadband] usage." Cellular data is already billed this way, "the more bits you use, the more you pay," he said. So why not cable Internet, too?

What is Frontier's CEO saying about data caps?

Comcast's data caps make sense when you listen to Roberts, but the reality is data is not gas or electricity. If usage was pushing networks to the breaking point  -- which may happen someday -- using caps to lower usage make sense. The problem, according to McCarthy, is that technological advances have kept capacity ahead of demand.

McCarthy called data caps a "business decision" and "not a network necessity."

Basically, the CEO explained that current network usage needs do not require limiting how much data people use. He acknowledged that could happen someday, but was very clear that networks -- not just his company's -- face fewer capacity constraints due to improving technology. He also noted that data transport costs have declined.

"There may be a time when usage-based pricing is absolutely the right solution for the market, but I don't see that as the path the market is taking at this point in time," he said.

McCarthy also pointed out that data caps are a way to control consumer behavior -- perhaps to make it less likely that they drop traditional pay television in favor of streaming options. If consumers have unlimited data they may "cut the cord with a cable company because we give them the right product to do that," he said.

That's something Frontier, which does sell cable, seems willing to encourage, but Comcast and AT&T do not want to happen.

What happens next with data caps?

It's easy to see why AT&T and Comcast want to impose data caps before they actually need them to control network traffic. Adding them now sort of prepares their customers for the eventuality of paying overage charges or spending more money for unlimited data. Even though the vast majority of their customers won't hit the caps (which are set at a terabyte for Comcast customers and for many AT&T customers) having them sets the table for future charging.

It's also a guard against people cutting the cord -- a way for the two companies to make it so people will be afraid to drop cable or charge them overage charges if they choose to do so. Adding the caps is also a way for both ISPs to pad their bottom line with people paying for uncapped plans (AT&T currently charges $30 a month for that privilege while Comcast's costs $50).

McCarthy, whose company operates as competition to Comcast and AT&T in some markets, has taken a bold stance. He's saying that data caps are not needed to protect network performance but are instead a way for ISPs to charge more. That's a pro-consumer approach where the CEO acknowledges that if things change, perhaps caps will be needed, but for now, the public should see AT&T's and Comcast's actions for what they are.