Having gone to college in a rural Iowa town of just 9,000 people that had not one, not two, but three Casey's General Stores (NASDAQ:CASY), I'm intimately familiar with the chain. On the outside, you might consider it to be any old gas station.

But live in one of these communities and you quickly see that it also serves as a grocery store for those in a hurry, and a pizza carryout service that's gaining in popularity. That helps explain why shares currently trade for almost 0.7 times sales -- not ridiculously expensive compared to the overall market, but surely at a premium compared to what the stock has traded for in the past. 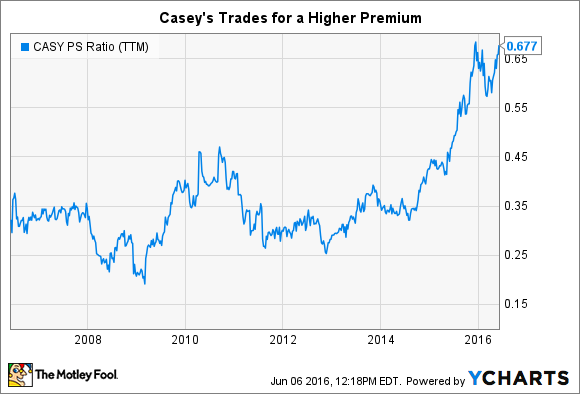 Over the short term, there are certain variables that will definitely have an impact on the stock price -- like margins on fuel sales, and locking in lower-than-expected prices for cheese -- but I don't think it's worth spending too much time sweating over these figures.

Nor do I think we should pay too much attention to meeting analyst expectations on a quarter-by-quarter basis. That's for short-term investors to worry about.

In the end, here's what matters: food and fountain

The long-term thesis for this company is clear: By leveraging its dominant status in small-town, rural America, Casey's can corner the market on high-margin food prep and delivery. The barriers to entry in pizza (and other food) service aren't very high, but it would take a Herculean effort for a start-up to match Casey's total of 1,890 locations.

At the beginning of the fiscal year, management said that it expected comparable-store sales (comps) for food and fountain (of which pizza is the king) to come in at 10.4%. As you can see, things started out well enough, but comps slowed precipitously in November, with only a moderate pickup thereafter.

Before you get too excited about February's comps, management said that there was a bump equivalent to "3.6% to 3.9%" because of the extra leap year day. In other words, in reality food and fountain comps were closer to 6.5% growth.

What I'll be listening for in the conference call

Since results were released Monday after the market close, we already know that the company fell short of the 10.4% comps goal. Officially, food and fountain comps for the year came in at 8.4%, though some of that was due to a boost the company got in February because it was leap year.

Heading into the next fiscal year, management says that food and fountain comps should rise 10.2%. Call me a grump, but I'm very wary of trusting this figure.

I want to know why the company was so far off its mark in 2016 and will be looking for more in Tuesday's conference call. During the company's last conference call, CEO Bob Myers said that "pizza delivery and major remodels were going to be back loaded ... into the fourth quarter. And knowing that they produce significant increases specifically in the prepared food category, you won't see the benefit of those until probably later in the fourth quarter."

That didn't really happen. And management needs to explain how the three key drivers for food and fountain growth -- changing a number of locations to 24-hour service, the introduction of a mobile app (which had 200,000 downloads at the end of last quarter), and a roll-out of pizza delivery -- will play out in the coming fiscal year.

The fear is that the slowdown may be due to management overselling the size of the market opportunity, competition eating away at growth as it sees the success that Casey's is having, or a combination of both.

While the business itself has been performing very well, if Casey's isn't able to prove that it can withstand competitive pressures, its stock could suffer over the long run.

Management at Casey's General Stores Inc. Has Some Explaining to Do @themotleyfool #stocks $CASY Next Article
Current