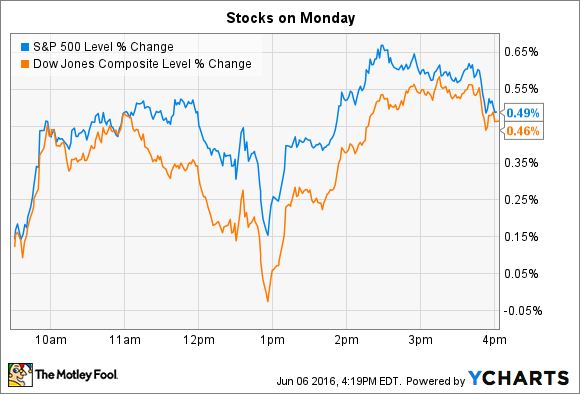 In economic news, comments from Federal Reserve Chair Janet Yellen suggested that the central bank may hold off on raising interest rates in its meeting later this month. Last week's soft job market report raised "new questions about the economic outlook," Yellen said in a speech, despite some recent promising signs such as increasing consumer spending.

It's not clear whether job growth will bounce back to its earlier solid pace or will continue slowing down, which means the Fed is planning to proceed cautiously. "My colleagues and I will be wrestling with these and other related questions going forward," Yellen explained.

As for individual stocks, Bitauto (NYSE: BITA) and Sasol (NYSE: SSL) both logged large price swings on Monday. Here's why:

Bitauto, which provides online marketing for China's automotive industry, soared 12% after announcing a series of new partnerships that helped it raise $300 million in cash. The deal saw Bitauto receive $50 million each from Baidu, Tencent Holdings, and JD.com, and another $150 million from private investment firm PA Grand Opportunity. Once complete, the investments will leave Baidu at 3% ownership of Bitauto, with Tencent claiming 7%, JD.com owning 24% and PA Grand Opportunity controlling roughly 8%.

The company is particularly excited about the new partnership with Baidu, which dominates the online search industry in China. "We expect to leverage [Baidu's] leadership in mobile and desktop online search, big data and transaction services platforms for additional strategic advantages as we continue to create the industry leading new and used car purchasing experience for customers in China," Bitauto CEO William Li said in a press release.

Investors also cheered the cash infusion, as Bitauto recently swung to a net loss of $108 million in Q1. It needs capital to plow into building out its sales platform and extending its reach deeper into the mobile side of the business, which is why management was happy to have struck these agreements.

Sasol shares fell 11% after the energy giant announced two pieces of bad news for investors. First, it projected that earnings will drop by 20% for the fiscal year that ends on Jun. 30, because of what management described as a "volatile macroeconomic environment."

The sharp drop in crude oil prices has pinched profits, especially those from its Montney gas shale property. Slumping natural gas prices also hurt results. Altogether, management sees earnings declining by 39% this quarter. The good news is that production volumes and cost cuts are tracking ahead of Sasol's earlier projection, but as long as commodity prices stay down, there will be plenty of pressure on earnings.

Separately, Sasol revealed that its Lake Charles Chemicals project is now expected to cost as much as $11 million, up from the $8.9 million it had previously forecast, because of construction delays that pushed expenses higher. The project is still expected to be positive for the business in the long-term, but it will simply take longer to recoup the initial investment.

Taken together, the two news releases point to a tough earnings outlook for Sasol over the short term, and Wall Street punished shares by sending them lower on Monday.