A Target local to the author, just before shutting down in January.  This aisle used to hold cold beer and various snacks.  Image source: Anders Bylund.

What: Shares of Target (NYSE:TGT) fell 13.5% in May 2016, according to data from S&P Global Market Intelligence. Some of this slump was of Target's own doing -- and some of it wasn't.

So what: First, the stock took a 5.5% dive on May 11 due to a bevy of disappointing earnings reports from Target's sector rivals. Notably, Macy's shares plunged 13% on 5.6% lower comparable sales and reduced full-year guidance targets. Target investors took this wave of retail weakness as a bad sign for their own holdings.

A week later, those pessimists were proven right. Target's own first-quarter report came in, showing a 5.4% year-over-year revenue decline despite slightly higher comparable sales. Target shares took a 7% haircut the next day, and the stock was stuck at this level for the rest of the month. 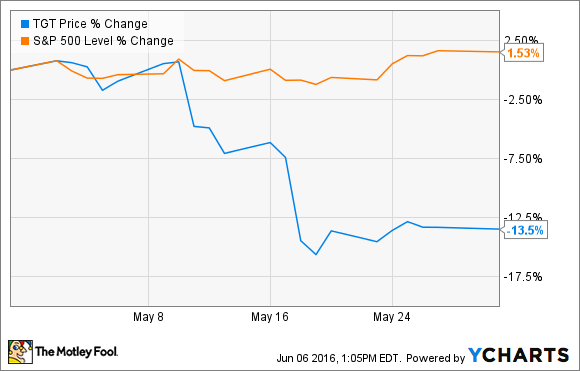 Now what: Target actually beat earnings estimates in the first quarter, and CEO Brian Cornell was "pleased" with that report. But it wasn't all rainbows and butterflies, as Cornell also pointed to a "challenging" consumer environment in the short term.

The company's promotional events have proven successful in recent quarters, and you can expect more of these revenue-grabbing swings as Cornell fights to right the ship. Target is also taking controversial stances on important issues like minimum wage and transgender rights, but that type of PR storm rarely affects a major company's bottom-line results.

It's back to Brass Tacks 101 for the nationwide retailer. Annual sales have only increased by 6% over the last 5 years, alongside falling operating margins and wildly bouncing free cash flows. Target's management needs to put a finger on the retail strategies that work and double down on these opportunities. Hot tip: Cornell is thinking hard about his minuscule online sales and the click-to-lay-away digital order approach. He could (and probably should) put his back into these options.

Why Target Corporation Fell 13.5% in May @themotleyfool #stocks $TGT $M Next Article
Current