Apache (NASDAQ:APA) has been surrounded by rumors a lot lately as a potential merger and acquisition target. However, at the moment, it's still an independent company. That independence might not last forever, unless the company goes on the offensive and makes an acquisition of its own. That would finally put it out of the reach of closest rivals, which had been seeking to take advantage of the downturn to acquire it.

Takeover speculation surrounding Apache started last November when rumors surfaced that an unnamed rival had made an unsolicited approach on a potential takeover. Analysts initially pointed to a big oil giant as the likely bidder, but it turned out that Anadarko Petroleum (NYSE:APC) made the non-binding offer as a way to feel out Apache's interest for a merger of equals. Apache quickly rejected the idea, causing Anadarko Petroleum to conclude that such a transaction wasn't worth pursuing. Investors and analysts both agreed that the proposed transaction wasn't a good fit on a strategic level for Anadarko.

That initial rejection hasn't stopped the rumor mill, which cranked up again last month. This time, an online report said that the company may be acquired by Occidental Petroleum (NYSE:OXY). That report coincided with a town hall meeting that Apache had set up with its employees. However, that town hall was actually set up to discuss layoffs, not an acquisition by Occidental Petroleum as the report had suggested. As such, that rumor quickly died off.

Hunt or continue to be hunted

Clearly, the market still views Apache as a prime takeover candidate. There's good reason for that, which starts with the fact that the company has an investment-grade balance sheet that is flush with $1 billion in cash. That balance sheet strength was built after Apache retooled its portfolio over the past couple of years, jettisoning higher-risk assets in order to focus on its North American shale position. Because of that, the company was able to build a strong position in the Permian Basin as well as the emerging SCOOP play in Oklahoma, which is complemented by solid legacy assets in Egypt and the North Sea. That said, it is this combination of balance sheet strength and a strong asset portfolio that is catching the eye of its rivals.

One of the ways Apache could deter its competitors from future approaches is by significantly bolstering its size and thus putting itself out of their reach. At the moment, Apache is clearly within their grasp given that the company is half the size of Occidental Petroleum and about a third smaller than Anadarko Petroleum: 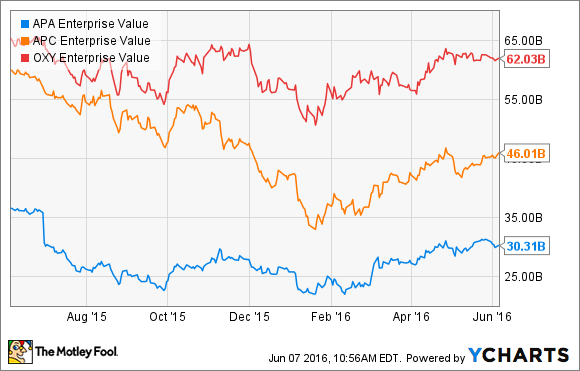 Because of its currently smaller scale, Apache would need to target a company that's at least half its size in order to bulk up to the point where it would no longer be a viable takeover target. One interesting target is the $19 billion Concho Resources (NYSE:CXO), which would be a good strategic fit for Apache. What makes Concho Resources a fit is its top-notch position in the Permian Basin. The company currently controls 650,000 net acres in the play, which holds an estimated 5 billion barrels of oil equivalent resource potential. Furthermore, like Apache, Concho Resources has a cash-rich balance sheet, with is sitting on $500 million in cash to go with minimal debt for a company of its size.

An acquisition of Concho Resources or a similarly sized company would increase the size of Apache to such a degree that it would likely no longer be a takeover target. Also, if it made the right deal and acquired a company with a strong balance sheet and solid growth potential, Apache could create significant value for its investors in the future as it accelerates production growth at a time when oil prices are projected to head higher.

If Apache wants to put an end to the rumors, it needs to go from being the hunted to being the hunter. In doing so, it would not only turn off would-be suitors due to its larger size, but it could create a lot of value by making a deal for a company that's well positioned for higher oil prices.