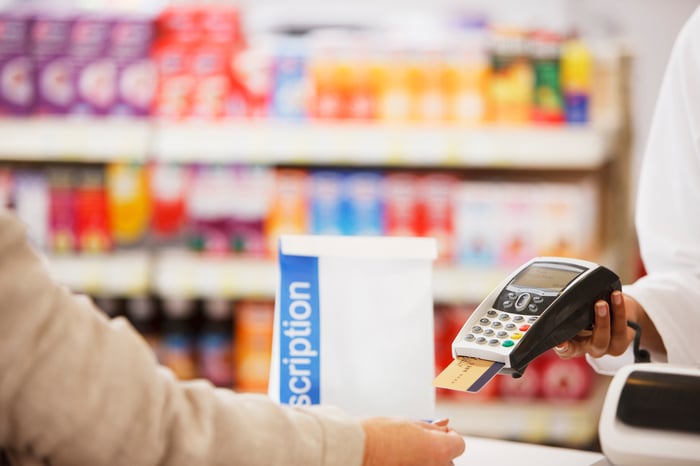 Valeant Pharmaceuticals (NYSE:BHC) hasn't seen the end of the tunnel yet. Multiple issues have plagued the drugmaker for almost a year, including controversy over its pricing practices, restatements of previous quarters, and missed SEC filing deadlines.

While shareholders might have hoped that Valeant would begin to enjoy some positive news when the company reported its first-quarter earnings results before the market opened on Tuesday, those hopes were quickly dashed. Here are the key things you need to know from Valeant's first-quarter update.

Valeant reported first-quarter revenue of $2.4 billion, a 9% year-over-year jump. This figure wasn't a surprise, as the company had previously projected revenue between $2.3 billion and $2.4 billion.

There was a negative surprise, however, with Valeant's bottom line. The drugmaker had projected adjusted earnings per share between $1.30 and $1.55 back in March. Valeant subsequently reiterated that guidance in May. But when the company announced its actual results Tuesday morning, adjusted earnings for the first quarter were only $442.6 million, or $1.27 per share -- slightly below the low end of Valeant's expected range.

On a GAAP basis, Valeant reported a first-quarter net loss of $373.7 million, or $1.08 per diluted share. That was significantly worse than the $97.7 million net income, or $0.28 per diluted share, the company reported in a restated financial statement for the first quarter of 2015.

Valeant's first-quarter earnings miss wasn't the worst news from its update, though. The company also announced revised full-year 2016 guidance that disappointed investors. Valeant had previously estimated 2016 revenue would be between $11 and $11.2 billion. Now, however, the drugmaker expects full-year revenue to be between $9.9 billion and $10.1 billion.

Valeant CEO Joseph Papa pointed out that "the majority of our businesses are performing according to expectations." However, he specifically referred to one business that isn't -- U.S. dermatology.

While Valeant reported a year-over-year revenue increase of 9% in the first quarter, that masks a major revenue decline in its dermatology business. First-quarter dermatology revenue was $228.6 million, a whopping 43% plunge from the $398.5 million reported in the same period of 2015.

Joseph Papa only singled out dermatology, but Valeant's ophthalmology business is also struggling. The company reported first-quarter ophthalmology revenue of $90.7 million, a 30% decline from the $129.1 million posted in the first quarter of 2015.

After severing ties with Philidor in October 2015, Valeant had to scramble to find another distribution partner. Walgreens stepped up to fill the gap, with an agreement between the two companies announced in mid-December.

The terms of that agreement, however, included price cuts of 10% on Valeant's dermatology and ophthalmology drugs. These price reductions and the transition itself no doubt negatively impacted first-quarter sales of those products.

Although the major news from Valeant's first-quarter update was gloomy, there was at least one bright spot. Joseph Papa said that Valeant should file its financial results on time moving forward, which will alleviate concerns about the company defaulting on the terms of its loans.

It's clear that Valeant still hasn't gotten out from under the shadow of the problems that emerged last year. However, the company has a capable new CEO. Previous acquisitions are contributing additional revenue (although not enough to fully offset dermatology and ophthalmology sales decreases). The pipeline looks solid.

Can Valeant turn things around? Probably so. How long that will take, though, is anyone's guess.