There has been some controversy over the past month or so about Tesla's (NASDAQ:TSLA) new pricing model for the entry-level 70 kWh Model S. The company introduced a new $3,000 range-upgrade option that increases the battery capacity to 75 kWh, and that extra 5 kWh of juice is good for approximately 19 more miles per charge.

The controversial aspect of this new option was that starting with the April refresh, all 70 kWh Model S vehicles actually already included a 75 kWh battery pack, but were software-limited to 70 kWh. Customers could opt to unlock the feature after delivery for $3,250. Tesla said that it had ceased production of 70 kWh packs, which likely streamlines manufacturing and generates production efficiencies. Model X only comes in 75 kWh and 90 kWh capacities. 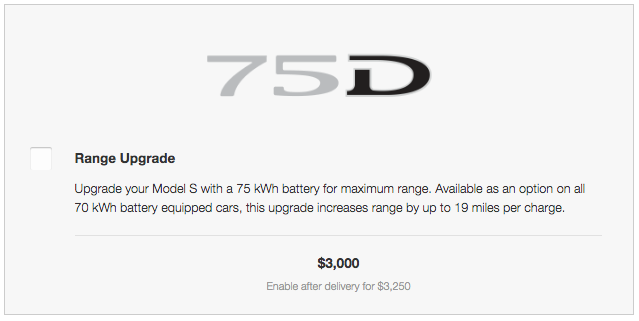 This is a completely new model for the auto industry, where customers need to pay extra to unlock functionality of hardware that they've already purchased. But it's not that unheard of in the world of tech.

Think about your computer: It's not uncommon to purchase software for your computer's existing hardware that gives the device new functionalities and the ability to perform additional tasks.

Or think about processors that are set to certain clock speeds by the manufacturer in order to optimize performance and balance power efficiency or thermal considerations, despite the fact that the processor is technically capable of performing at higher speeds. Sure, you can easily overclock your processor if you're so inclined, and do so without paying the manufacturer, but the general idea of enhancing hardware through software is rather common within tech.

Even if the customer does not upgrade the range, it's also possible that there are other technical benefits that may not be immediately clear to the consumer, such as longer useful life or reduced degradation over time.

In Tesla's case, the most prominent example of purchasing software to enable hardware is Autopilot, which has not received the same criticisms. Autopilot hardware is included in all vehicles built after September 2014, but you must pay to activate the semi-autonomous capabilities, either at the time of purchase ($2,500) or after the purchase ($3,000).

But let's think through the financial implications of the new range-upgrade option.

Earlier this year, Tesla's VP of Investor Relations Jeff Evanson suggested that Tesla's battery pack costs were already below $190/kWh. General Motors inadvertently tipped battery partner LG Chem's hand last year when it said cell costs were already as low as $145/kWh. That was a year ago, and this figure has likely declined further since.

Cost per kWh is an extremely sensitive figure that is not publicly available. If we assume that Tesla is below LG Chem's cell costs, and costs have come down over the past year, let's just say for a moment that Tesla's cell costs are around $125/kWh. It's worth mentioning that the International Energy Agency recently noted that battery costs are declining incredibly quickly, with Tesla leading the way in cost reductions.

If Tesla is already including an additional 5 kWh of cells now, that would imply about $625 in incremental cell costs going into the pack. That would hypothetically be an approximately 80% gross margin for the $3,000 option. Of course, Tesla may technically lose some money if the customer doesn't purchase the option, so the overall impact to the business will depend on the penetration rate of range upgrades.

While we're using some estimates here, if the gross margin for the range upgrade is even remotely near 80%, the adoption rate hurdle for the option to have a net positive impact on margins is quite low, especially when you consider the company's current automotive GAAP gross margin of 24%. More than likely, the range-upgrade option is providing a small but appreciated margin tailwind.