I love dividends, so I have to work double time to make sure I don't get suckered in by a big yield or a good story. Which is why Italy's Eni (NYSE:E) and Energy Transfer Equity (NYSE:ET) both make my list of dividend stocks I'd never buy.

Difficult to deal with

Italian oil giant Eni has a hefty 6% yield. That's well above the 3.3% yield that ExxonMobil (NYSE:XOM) offers. Notably, since Eni has already cut its dividend during this troubling period for oil prices, the current payout is at a level that's more attainable for the company. Mix those two factors, and you'd think energy investors would be champing at the bit for some shares of Eni.

But the backstory here is important. Partially because of its location, Eni has a long history of dealing with what could politely be called difficult nations. To give you a rough idea of the issue, about 45% of the company's proved reserves reside in Africa. Now, to be fair, there are perfectly well-run countries in Africa -- and then there are countries that are war-torn and run by despots.

One of the best current examples would be Libya, where Eni has oil and gas exploration activities. Up until a few years ago, that country was run by a dictator. Now it's, at best, in a transition period. In fact, the CIA notes that after the country's former leader was deposed, there were two rival governments vying for power. It's stuff like this that can make life extra-complicated for Eni. Some investors might like the idea of owning an oil and gas company that has a proven track record of making such dealings work out, over the long term. For me, it's just too much risk. I'd rather stick to companies that don't work quite as much with difficult political situations.

To be fair, Exxon, a stock I own, deals with difficult nations, too. But it's partners are much more broadly diversified and include a healthy dose of stable Western governments. There's one more little thing with Eni, though, that makes it very different from a competitor like Exxon... Italy still owns about 30% of the company. That makes it hard to figure out if Eni is as independent as investors might like -- another risk I'd rather avoid. At the end of the day, Eni has some very interesting things going on, but it's not a stock I would personally buy.

With the units yielding nearly 9%, income investors would be remiss if they didn't at least take a look at the company. But there are some problems here, and they all relate to a troubled acquisition.

When the energy markets hit the skids, Energy Transfer Equity inked a deal to buy The Williams Companies (NYSE:WMB). There was a significant cash component to the deal that would, at this point, require Energy Transfer Equity to issue units or take on debt. That has become problematic because Energy Transfer's units have fallen significantly, meaning more unitholder dilution, and additional debt would increase costs to the point that a distribution cut might be necessary. 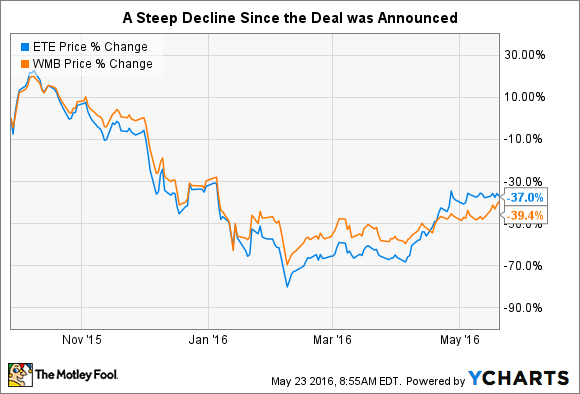 So, Energy Transfer Equity has been trying to scuttle the deal. And that's why I find myself saying "no thanks" to the units. But it isn't because Energy Transfer Equity made a bad acquisition choice or that it's having second thoughts. It's because part of the attempt to get out of the acquisition has involved selling convertible shares to make the deal less likely to happen because of contractual issues. (It's kind of complicated, but here's a quick primer on all that's gone wrong.)

That choice is questionable enough, but here's the linchpin: Half of that convertible sale went to Energy Transfer Equity's CEO Kelcy Warren. Oh, and the convertible could actually shield the CEO from some of the pain of a distribution cut if the deal does go through. That's a little too shady-looking for my taste, even if it doesn't run afoul of any laws. So, this deal maker has gone a step (or two) too far for my liking, and I'm not going to be a buyer anytime soon.

When you invest in a company, it's easy to think you just own a piece of paper. But you are inherently dealing with the company's leaders and, indirectly, with all of the company's partners. It's often those relationships that end up being the hidden risk. In the case of Eni and Energy Transfer Equity, the difficult nature of the relationships is on display. Some investors might be willing to take on those risks for the added income, but I'd rather stick to more boring fare. Which is why these are two stocks that I'd never buy.