Once a year, Main Street Capital (NYSE:MAIN) hosts an analyst and investor day meeting at which executives can communicate directly to those who care most how the company is performing. These presentations are often lengthier and more informative than typical quarterly disclosure, and its most recent presentation was no exception.

Here are three of the most important things investors should know now.

1. Its smallest and oldest businesses are its biggest winners

Main Street Capital went public in 2007 with an investment portfolio that held investments in an assortment of businesses, from small cafes to candle makers and IT companies. Many of these investments are still in the portfolio today, albeit with lower debt burdens and higher earnings, resulting in larger dividend checks paid back to Main Street.

Besides dividend income, these investments have also generated the lion's share of its unrealized gains. Note that its lower middle-market investments originated in 2011 and prior are marked substantially above cost: 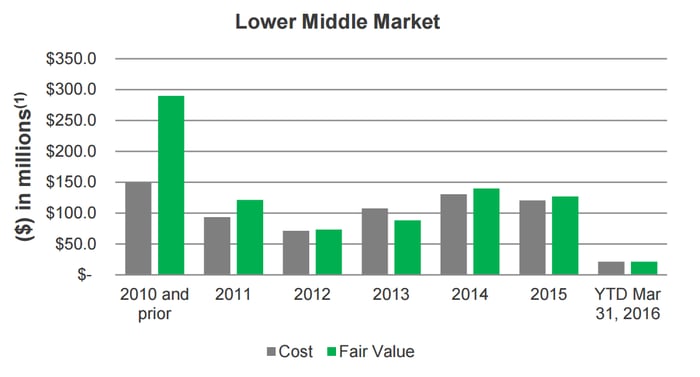 Later in the presentation, the company notes that equity investments in its smaller companies have generated about $3.27 in unrealized capital gains per share.

The success of its lower middle-market portfolio shows through in a similar chart that encompasses its entire portfolio. Investments that were originated in 2011 or prior underlie the majority of its accumulated unrealized gains.

Its losses largely come from later vintages that were dominated by mostly debt investments in larger middle-market companies. (No surprise -- debt investments can generally only go down in value, not up.) 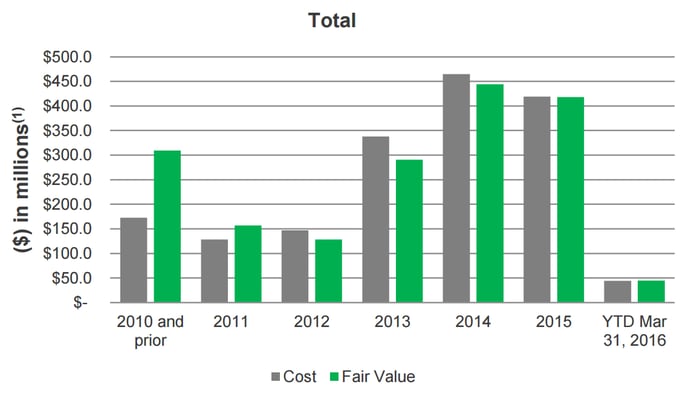 In an industry where so many companies spend a substantial share of their income paying management teams, Main Street Capital stands out in marked contrast. A focus on minimizing expenses -- mostly compensation -- has resulted in a substantially lower cost structure than the average business development company: 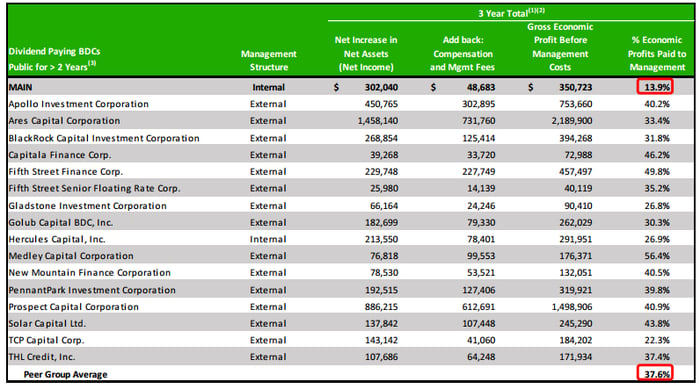 This is, in part, why Main Street Capital has historically traded at a higher valuation than its peers on the basis of book value, but at a slightly smaller premium on an earnings basis. By keeping expenses low, more of the income generated from its investment portfolio finds its way to shareholder pockets.

All else equal, a BDC that makes average investment decisions but carries below-average expenses will invariably create above-average returns for shareholders.

3. The historical performance of its loan book has made a difference

Starting in 2013, Main Street Capital began making loans to larger middle-market companies. Its presentation details the credit performance of this particular loan book, pointing out that its loss on default has been relatively low -- certainly much lower than it would expect to lose if a lower middle-market company defaulted on its debt. 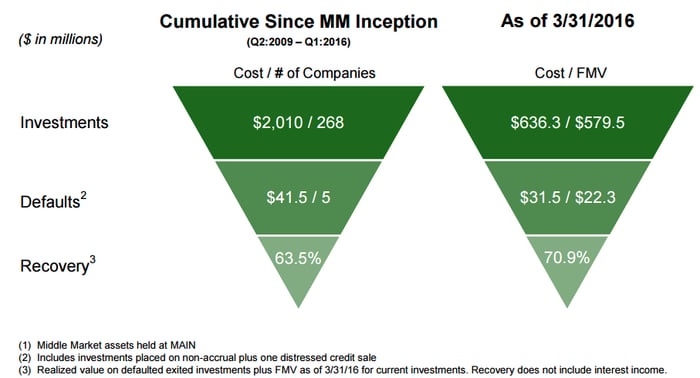 Middle-market investments are probably here to stay as part of Main Street Capital's business model. Though they don't offer the same upside potential as equity investments in smaller companies, they're more liquid and generally allow Main Street Capital to pad its originations when it can't find a sufficient number of interesting deals in the lower middle market.

The company does have its challenges despite its historical outperformance. Assets with direct energy exposure made up 9.5% of its investment assets at the end of the last quarter, and many of its non-energy investments are located in Texas, where a decline in oil prices could have an indirect impact on all businesses. Not surprisingly, the company's share price has largely followed oil prices in 2016.

Main Street Capital's recent update provided plenty of additional detail about its investment portfolio, including slides on its portfolio company valuations, as well as an in-depth look at a few of its portfolio companies. It should be required reading for anyone with any interest in the company.