Investors in retirement typically gravitate toward companies with rock-solid fundamentals and a time-tested trajectory of dividend growth over the long term. With this in mind, names such as Coca-Cola (NYSE:KO), Clorox (NYSE:CLX), and McDonald's (NYSE:MCD) are compelling candidates for investors in their golden years.

Not your granddaddy's Coca-Cola

Coca-Cola is the undisputed leader in non-alcoholic drinks around the world. Its flagship Coca-Cola brand and Diet Coke are the two most popular soda brands in the U.S., and the company owns a leading portfolio consisting of 20 different brands making over $1 billion each in global annual sales.

Consumers are moving away from traditional sodas toward healthier drinks, and this is a major trend to watch. However, Coca-Cola is adapting to changing consumer demand with products such as water, juice, sports drinks, and tea. Among the company's 20 billion-dollar brands, 14 of them are beverages targeted at health-conscious consumers, such as Powerade, Dasani, and Simply Orange.

Coca-Cola and its largest bottler, Coca-Cola Femsa (NYSE:KOF), recently acquired the AdeS soy-based beverage unit from Unilever (NYSE:UL) in a deal worth $575 million. AdeS generated net revenue of $284 million in 2015, and it has a big presence in Latin American countries such as Brazil, Argentina, Uruguay, and Paraguay. Betting on healthier drinks and international markets expansion sounds like a smart way for Coca-Cola to accelerate growth via acquisitions over the middle term.

Coca-Cola has the financial resources to invest in product development and acquisitions, the company is a formidable marketing machine, and it owns a gigantic distribution network allowing it to efficiently launch new products on a global scale. For these reasons, the company looks well -positioned to continue thriving in a healthy new world.

The company has an impressive trajectory of dividend growth, Coca-Cola has increased dividend payments in the last 54 consecutive years, including a 6% dividend increase for 2016. The dividend payout ratio is quite reasonable at around 72% of earnings, and Coca-Cola stock is paying a dividend yield of 3.1% at current prices.

Clean and shiny dividends from Clorox

Clorox owns a leadership position in several consumer staples categories. In addition to its flagship Clorox brand, the company owns widely recognized names such as Glad, Poett, Britta, Hidden Valley, and Ayudin. The company sells mostly everyday necessities as opposed to discretionary goods, and this makes both sales and cash flows more stable and predictable.

Clorox made $5.7 billion in total revenue during 2015, and nearly 80% of those sales came from brands occupying the first or second market position in their respective industries. The company is much bigger than most of its competitors, and this scale advantage has major implications in terms of cost competitiveness. 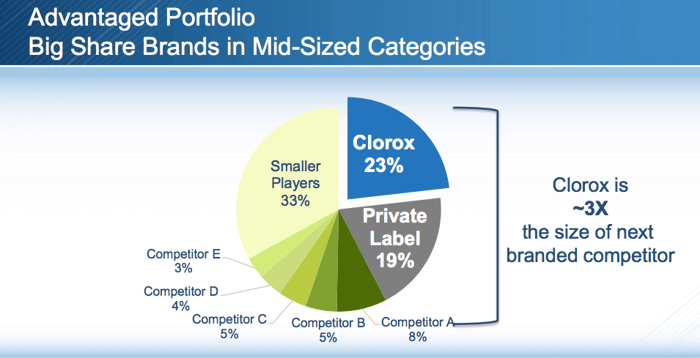 Total sales volume grew 4% last quarter, on the back of increasing volume across all of the company's business segments. This allowed Clorox to deliver a 5% increase in constant currency sales during the period. Management intends to deliver sales growth in the neighborhood of 3% to 5% over the long term, and the business is expected to translate 10% to 12% of revenue into free cash flow.

Clorox has raised its dividends in every year since 1977, including a recently announced dividend increase of 4%. The payout ratio is around 65% of earnings, and the stock pays a dividend yield of 2.5%.

A happy meal for dividend investors

McDonald's paid its first dividend in 1976, and it has increased dividends in each and every year since then. The payout ratio is around 64% of earnings, and the dividend yield stands at 2.9%. The company also has a generous share buyback policy, and it has substantially reduced the amount of shares outstanding over the decades. 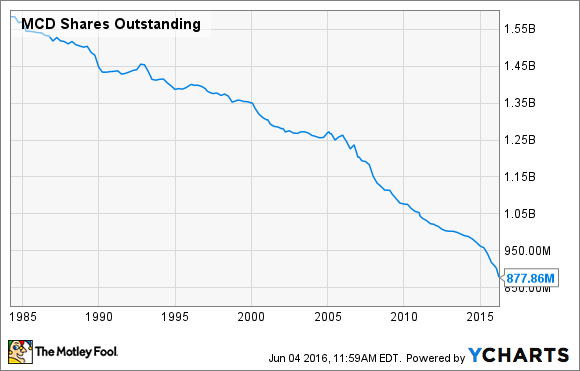 Cash flows for dividends and buybacks don't come out of thin air, of course. McDonald's owns nearly 36,500 restaurants in 125 different countries. Location is a crucial advantage in the fast-food industry, and McDonald's has positioned its stores in many of the most valuable corners in the top cities around the world. The company is the largest player in the highly fragmented $1.2 trillion global informal eating-out category, which provides scale advantages and negotiating power with suppliers.

McDonald's is embarking on multiple initiatives to sustain growth over the years ahead. The company is making operations leaner and more efficient, while building a more innovative menu. McDonald's has successfully introduced its all-day breakfast menu in the U.S. and Australia, and management is working on improving quality with offerings such as the Artisan Grilled Chicken Patty, the Buttermilk Chicken Sandwich, antibiotic-free chicken, hormone-free milk, and cage-free eggs.

These initiatives are delivering solid results, McDonald's announced a healthy 6.2% increase in global comparable sales during the first quarter of 2016. According to CEO Steve Easterbrook, the business is delivering healthy momentum across the board, and the fast-food giant is also gaining market share versus the competition.