Over the past few days, you may have seen some headlines about Tesla Motors (NASDAQ:TSLA) taking delivery of copious quantities of battery cells from Samsung. This comes shortly after reports that Tesla was in talks with the three major South Korean battery suppliers: LG Chem, Samsung, and SK Innovation.

This has all sparked speculation that Tesla was straying from its main battery flame for its cars -- Panasonic -- but it turns out that's not the case.

In characteristic fashion, Tesla CEO Elon Musk has taken to social media to clarify the situation. Panasonic will remain the exclusive supplier for all current and forthcoming vehicles, including Model S, Model 3, and Model X.

So if the Samsung cells are not destined to make their way into vehicles, where else could they go? The only answer is that Tesla intends to use the Samsung cells for Tesla Energy products. Keep in mind that the Gigafactory's long-term targets have always been for 35 GWh of cell production and 50 GWh of module and pack production. That necessitates second-sourcing cells to put into packs that are assembled at the location.

If you look at the Tesla Energy site, you'll note that you can easily spec out and order a commercial-grade Powerpack immediately. These start at $162,000, and go up to "That's a big system" and please-call-us-if-you-need-to-purchase-a-ridiculous-amount-of-storage-for-your-zombie-apocalypse-bunker. Tesla has long prided itself in being a leader in apocalyptic defense scenarios, after all. 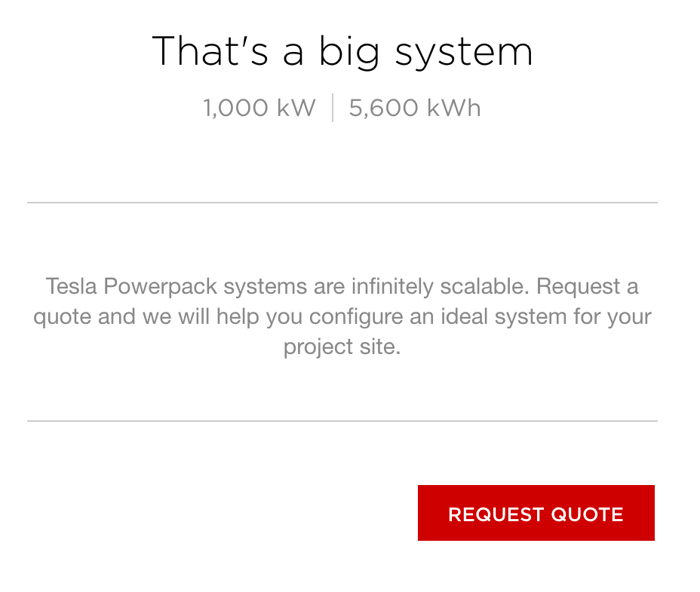 However, if you look for a Powerwall, you can only reserve a residential stationary storage solution for later fulfillment. This implies that there is a current shortage of cells relative to combined Powerwall and Powerpack demand. It also stands to reason that the cell supply that Tesla does have available is predominantly being allocated to commercial and utility customers ordering Powerpacks, which makes perfect sense, since Powerpack is where it's at.