Most working Americans pay a substantial portion of their paychecks toward the Social Security system. 12.4% of the first $118,000 you earn from salary or contractor income gets sent to Social Security. If you're a contractor, you bear the full burden of that tax, but if you're a regular employee, only half comes directly from your paycheck, while the other half is paid by your employer as part of your total compensation.

That's a lot of money flowing into the system, so it may surprise you to learn that every penny paid into Social Security is used to make benefit payments. In fact, Social Security currently pays out more to beneficiaries than workers pay into it with taxes. Between payroll taxes and taxes on the benefits of higher-income recipients, Social Security collected $785.6 billion in revenue in 2014, whereas it paid out $848.5 billion in benefits. Social Security was able to make payments in excess of its tax income because of interest earned on its Trust Funds.

Thanks to the interest they've earned, Social Security's Trust Funds actually increased in value by $25 billion in 2014. Those Trust Funds are currently shoring up Social Security. But according to the program's trustees, that source of extra funds will run dry by 2034, a mere 18 years from now.

The Trust Funds were initially filled by workers' tax dollars. Between 1984 and 2009, Social Security regularly ran tax surpluses, which cumulatively put trillions into the program's Trust Funds. The Trust Funds then bought Treasury bonds, which helped the rest of the government finance what was typically deficit spending. The chart below shows the basics of how that funding process works. 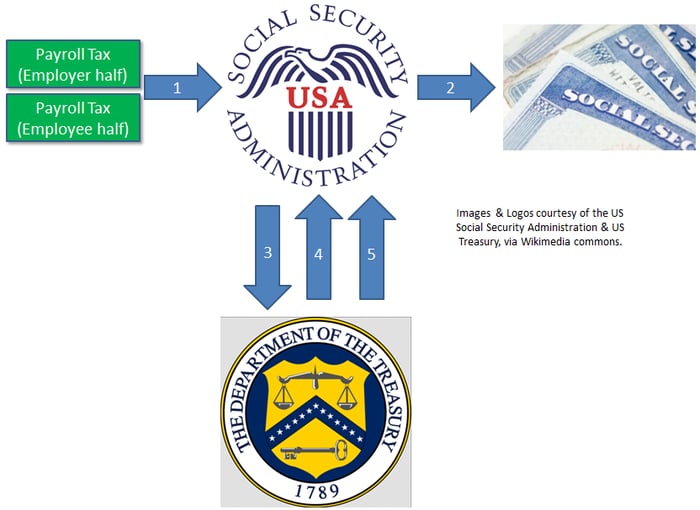 Chart by the author.

In a nutshell, if you look at the numbers in the arrows:

That basic model is expected to hold until around 2019 or 2020, when tax income plus interest is no longer anticipated to be enough to cover benefits. At that time, the direction of arrows 3 and 4 will essentially reverse as Social Security begins redeeming its bonds to spend down its Trust Funds and thereby cover benefits. Once those Trust Funds empty around 2034, absent any changes to the law, benefits will need to be cut to around 79% of current levels.

What that means to you

This funding model means that if you're working, the money you're paying into Social Security right now gets spent to cover the costs of those currently receiving benefits. It also means that the excess tax money paid into Social Security over the past few decades is expected to be paid back to the system -- with interest -- to cover the program's tax shortfalls over the next 18 or so years.

Unfortunately, the high-certainty nature of the Treasury Bonds that Social Security invests in also means that it's fairly straightforward to project the future of the program. As a result, the pending benefits shortfall that the Social Security trustees project is very real. With that day of reckoning a mere 18 years away, it will affect even some who are currently receiving benefits, not just future recipients.

When you boil it down to its core, there are really only three major tools available for Social Security to try to cover that shortfall:

All three of those tools will likely impact you in some way. If taxes go up, it'll hit you in your paycheck in the form of a lower current salary and the risk of lower future raises due to your employer having to cover the employer part of the tax. If benefits go down, it will hit you as a retiree in the form of a lower Social Security check. If Social Security changes its investing model, it can potentially increase the Trust Funds' lifespans, but at the cost of lower certainty of the money along the way.

The good news is that while the issues facing Social Security are very real, the biggest impacts from those issues are still several years away. That gives you time to prepare. No matter what combination of those three tools Congress uses to try to shore up Social Security, the best tool at your disposal is to invest a bit more to cover that shortfall.

The sooner you get started, the better your chances will be of covering either the direct gap from Social Security's Trust Funds emptying or the costs of whatever fixes are put in place to shore them up. So get started now, and within the next two decades, you'll be very glad you did.