What: Shareholders of Kindred Healthcare  (NYSE:KND), a nationwide provider of rehabilitation and post-acute-care services, had a rough May. The company's stock shed 18.8% of its value during the month, according to data from S&P Global Market Intelligence. 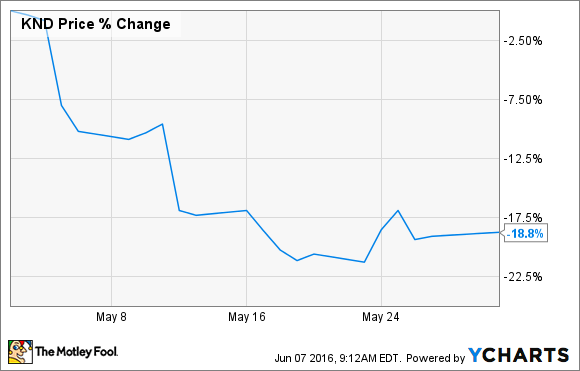 So what: Kindred Healthcare reported its first-quarter earnings results during the month, and the headline numbers looked just fine. Consolidated revenue for the quarter came in at $1.84 billion, up 9% over the year-ago period, and a nudge ahead of the $1.83 billion that Wall Street had expected.

The company's core diluted earnings per share of $0.25 also was better than the $0.23 that the pros were looking for. However, that number was down 26% when compared with last year's results.

Digging into the revenue numbers a bit further, Kindred's hospital division saw growth of only 0.4% during the quarter. However, the company was able to rapidly grow sales from its home health and hospice divisions during the period, which helped push overall revenue higher.

Still, even with the top and bottom line beat and an upgraded price target, the company's shares tanked.

Now what: Kindred reaffirmed its outlook for the full year, calling for revenue to land between $7.2 billion and $7.3 billion, and for core diluted EPS of approximately $0.90. Those figures are right in line with Wall Street's estimates.

More recently, the company has continued to execute on its acquisition strategy as it completed its asset swap deal with Select Medical Holdings Corporation (NYSE:SEM). The terms of the arrangement call for Select Medical Holdings to take over two of Kindred's transitional care hospitals and receive $800,000 in exchange for giving up four transitional care hospitals of its own. In addition, the companies confirmed that they are still working on swapping out more assets in the future.

Wall Street hasn't been a big fan of either of these businesses over the past year. Both of them have been sold off hard and have drastically underperformed the market. 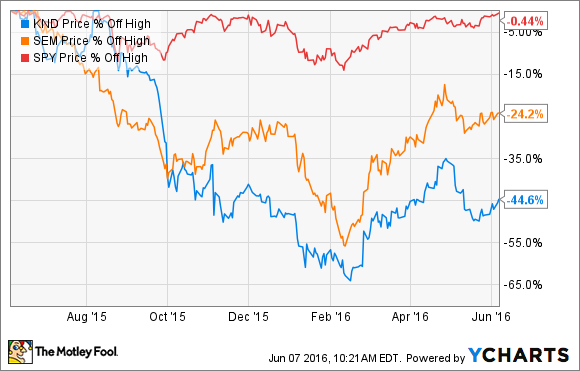 While the company isn't likely to put up eye-popping growth numbers anytime soon, Kindred is paying out a strong dividend that yields almost 4% right now, which may appeal to income-focused investors. That may be a reason to give this company's stock a closer look, especially with shares now trading at a discount.