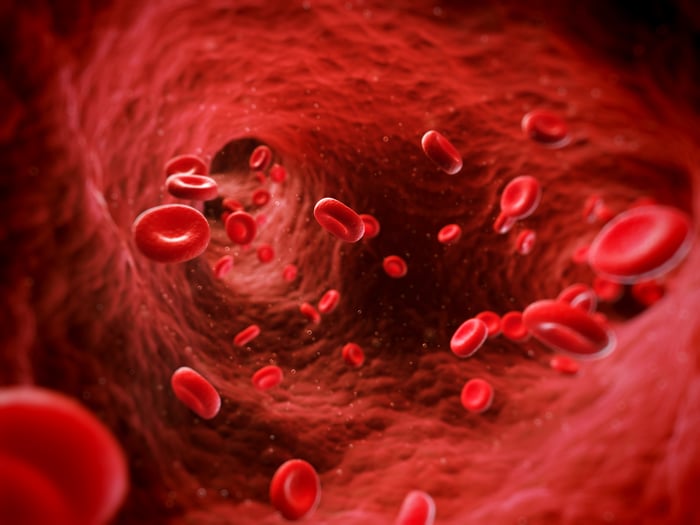 What: Oh, what a difference a day makes. Yesterday Agios Pharmaceuticals (NASDAQ:AGIO) was up 7%, presumably in anticipation of data to be presented at the European Hematology Association (EHA) meeting. Today it's down more than 15% at 2:50 p.m. EDT, after disclosing the data.

So what: Data from a phase 1 trial testing Agios' AG-519 in healthy volunteers wasn't scheduled to be reported until a poster session on Saturday, but apparently there was a snafu, causing an electronic version of the poster to be released early.

The efficacy data in the clinical trial looks good. AG-519 is designed to activate pyruvate kinase-R (PKR), a protein that's involved in the production of adenosine triphosphate (ATP). When healthy volunteers were given AG-519, the amount of ATP went up and the amount of an upstream precursor called 2,3-diphosphoglycerate went down.

While the drug appears to be doing what it's supposed to, investors seem to be reacting to a single case of thrombocytopenia -- low blood platelets -- in one of the healthy volunteers on the highest dose of AG-519. Agios Pharmaceuticals eventually plans to test AG-519 in patients with pyruvate kinase (PK) deficiency, a rare disease that results in an accelerated destruction of red blood cells. Low blood platelet levels could be a bigger problem in patients with PK deficiency than it was in the healthy volunteer, whose platelet level returned to normal seven days after the last dose was given.

Now what: The thrombocytopenia was only a grade 2 adverse event -- not severe -- and it only happened in one out of the 16 subjects in the trial, so we don't know the true rate of adverse events (or whether this was even caused by the drug). Also keep in mind that AG-519 is a backup compound to AG-348, which is in a phase 2 trial in patients with the disease. Data from that clinical trial, dubbed "DRIVE PK," is arguably more important to Agios Pharmaceuticals' valuation, although only some of the data will be presented because the trial is still recruiting patients.

Investors should get more information on Agios Pharmaceuticals' plans for AG-519, and what it's thinking about the potential for thrombocytopenia, during a conference call it's holding on Saturday.