What: Shares of Yelp Inc. (NYSE:YELP) climbed 24.7% in May, according to data provided by S&P Global Market Intelligence, after the local business review specialist announced stronger-than-expected fiscal first-quarter 2016 results. In the wake of that recent pop, Yelp has almost entirely recouped its year-to-date declines, after it was pulled down by the broader market's historically painful start to 2016. 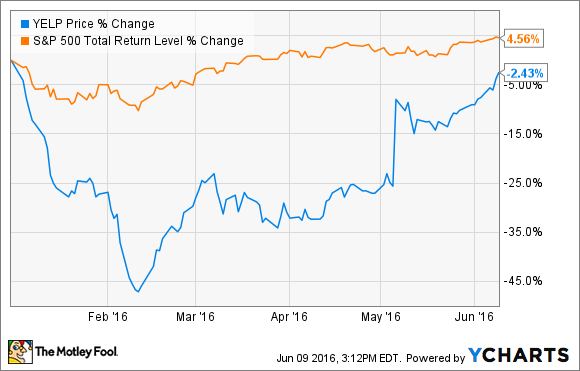 So what: Yelp's quarterly revenue jumped a healthy 33.8% year over year to $158.6 million, well above the high end of its $154 million to $157 million guidance range. And revenue would have climbed an even more impressive 42% had it not been for Yelp's strategic decision to phase out its brand advertising business in favor of focusing on the more promising local ad market. Sure enough, local advertising accounts rose 34% year over year, to around 121,000, and local advertising revenue grew 40%, to $138.1 million.

Meanwhile, keeping in mind Yelp's international websites are still in their infancy and comprised just 2% of total sales, its core site exceeded 100 million cumulative reviews last quarter, with a new mobile review contributed every 2 seconds on average. That's not to mention the fact transactions revenue more than doubled to $14 million, thanks to Yelp's acquisition of online food ordering company Eat24 last year.

And though Yelp remains unprofitable based on generally accepted accounting principles, turning in a GAAP net loss of $15.5 million, or $0.20 per share, adjusted earnings before interest, taxes, depreciation and amortization (EBITDA) came in at $13 million, down 20.2% from last year's fiscal Q1 -- also above guidance which called for $10 million to $12 million. For perspective, note Yelp consciously forsakes bottom-line profitability in favor of investing to take market share and drive top-line growth in these early stages.

Now what: Investors were equally pleased with Yelp's guidance, which called for fiscal Q2 revenue to increase 26% at the midpoint of its $167 million to $171 million range, where as analysts' consensus estimates predicted revenue near the low end of that outlook. Yelp also increased its full fiscal-year 2016 guidance, calling for revenue of $690 million to $702 million (up from $685 million to $700 million previously), and adjusted EBITDA of $93 million to $105 million (up from the previous lower end of $90 million)

In the end, though many investors continue to rightly weigh the risks associated with bigger, well-funded competitors muscling their way into Yelp's niche, there was little not to like about this past quarter. If Yelp can continue to capitalize on its growth opportunities and translate its stateside success overseas as it inches toward sustained profitability, I see no reason the stock won't continue to climb from here.