Midstream MLPs have been unexpectedly crushed during the oil market downturn. In fact, over the past year the average equity value of a midstream MLP is off by 25% as measured by the Alerian MLP Index (NYSEMKT:AMLP): 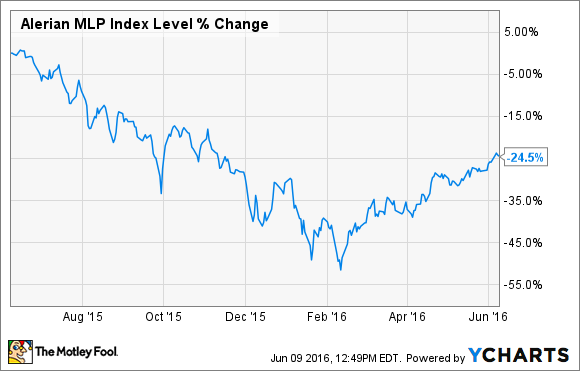 While the Alerian MLP Index has bounced off its lows, MLPs in general have a long way to go before they recapture their former highs. Further, while the sector is down right now, the future of energy infrastructure still remains strong due to the expectation that demand for energy will keep growing. While that rising tide will lift all boats, there are a number of emerging MLPs that could capture an outsized share of this future growth. In particular, Summit Midstream Partners (NYSE:SMLP), Boardwalk Pipeline Partners (NYSE:BWP), NGL Energy Partners (NYSE:NGL) are worth keeping an eye on due to their solid footprints and strong growth potential.

A growing gathering and processing footprint

Summit Midstream Partners bills itself as a growth-oriented MLP. It has done just that since going public in 2012, with the MLP increasing its distribution by 44% as the result of a number of acquisitions and investments that grew its footprint across most of the major shale plays. That footprint is shown on the map below, which also notes that the company owns natural gas, oil, and water gathering and processing assets that are supported by strong producer contracts.

In the near-term Summit Midstream Partners has clear visibility to invest between $150 million to $200 million per year in organic growth capex to expand its current systems. However, as the energy market improves the company's opportunities should expand, with it being able to compete for additional organic growth development projects in the Utica and Williston to go along with the potential for bolt-on acquisition opportunities across all its operating areas. It's the company's ability to build upon its already solid footprints in these key producing basins that makes Summit Midstream Partners an emerging MLP to watch.

An expanding transportation and storage asset base

Boardwalk Pipeline Partners is taking a slightly different approach to growth by focusing primarily on the transportation and storage of natural gas and NGLs. Further, its assets are not only positioned for growing supply, but also benefit from growing demand due to its connections with end-users. As such, it too has a diversified footprint across several shale plays as well as key demand centers: 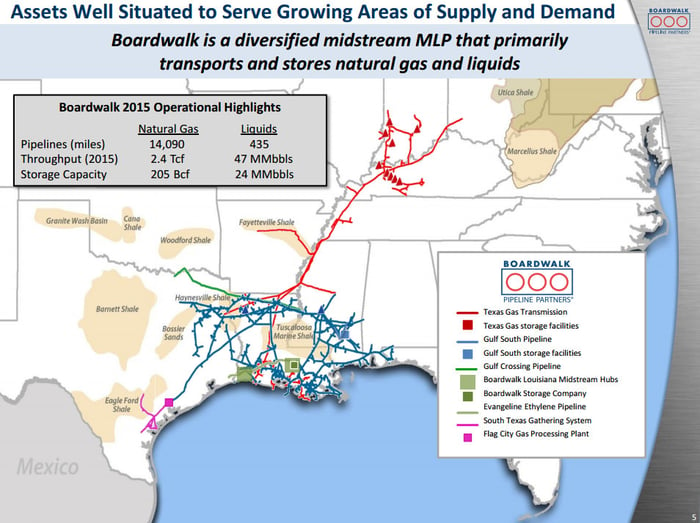 Boardwalk Pipeline Partners' dual focus on both supply and demand is driving a lot of growth opportunities its way. The MLP currently has $1.6 billion in projects that were either recently put into service or are under construction. These projects are expected to drive strong fee-based revenue growth for the next few years, given that each asset is backed by long-term contracts. Further, because of the scale and optionality of its asset base, the company is well positioned to capture additional growth opportunities in either direction in the future.

NGL Energy Partners' name might suggest that it's singularly focused on NGLs, but that's not the case. Instead, the diversified MLP provides multiple services including transportation, blending, and storage of crude oil, NGLs and refined products as well as water solutions and retail propane distribution. Further, its asset base spans almost the entire country: 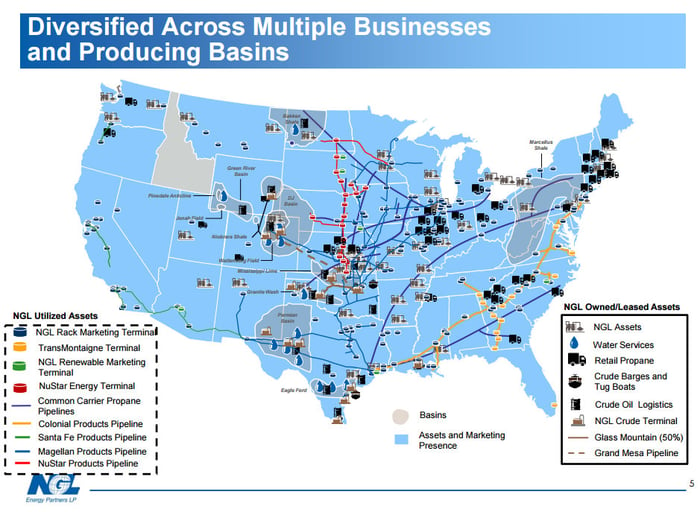 Given its large and diversified asset base NGL Energy Partners has multiple ways to grow. Organically, the company has a number of growth projects currently under way, including the Grand Mesa crude oil pipeline, a crude oil terminal in Louisiana, and the Sawtooth NGL storage caverns. Beyond that, the company's five business segments provide it with multiple future expansion opportunities through both organic growth and strategic acquisitions.

Summit Midstream Partners, NGL Energy Partners, and Boardwalk Pipeline Partners still have a lot of growth ahead of them. Not only do all three have near-term projects nearing completion, but each has a solid asset footprint that can be easily expanded in the future. That's what makes them all interesting growth stories to watch as the energy market begins to emerge out of its doldrums.