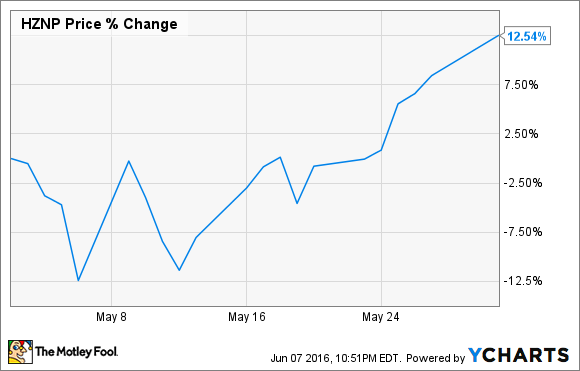 So what: Horizon's stock has been on a wild ride this year because of the price-gouging claims against nearly all specialty pharmas that was tripped off, in many ways, by Valeant Pharmaceuticals (NYSE:BHC). Valeant's practice of buying smaller companies and subsequently raising the prices of their drugs by astronomical amounts set off a political firestorm earlier this year.

As some of Horizon's own drugs, such as the pain reliever Duexis, are arguably grossly overpriced relative to their generic components, investors are apparently concerned that the drugmaker may be forced to slash prices on its biggest growth drivers, thereby lowering its gross margins going forward. The net result is that Horizon and Valeant's stocks have both struggled mightily this year in the wake of this price-gouging controversy: 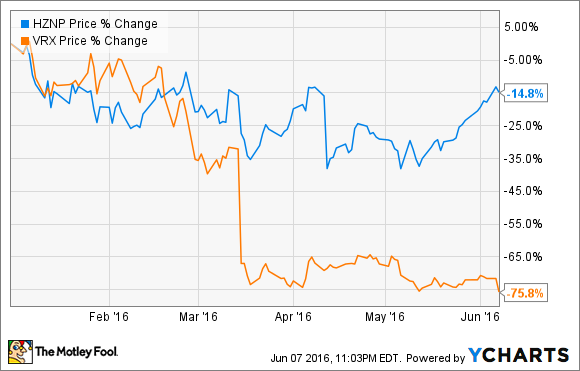 Now what: The key takeaway, and perhaps the underlying reason for Horizon's recent rebound, is that the company reported that its orphan medicines -- Ravicti, Actimmune, Krystexxa, and Buphenyl -- made up 40% of total net sales in the first quarter. That's a big deal, because orphan drugs have historically been immune to price-gouging claims, as well as pushback from payers. Put simply, Horizon is in the process of diversifying its revenue base away from controversial medicines such as Duexis and is steadily transforming into a legitimate orphan-drug company.

While I'm not convinced that the blowback from the Valeant fiasco won't weigh on Horizon's shares for a while longer, the drugmaker has been making the correct decisions in terms of righting the ship, so to speak. So even though I'm not a buyer at these levels, Horizon is definitely on my watch list at the moment. Before dipping my toes in the water, though, I'd like to see the company expand its footprint in the orphan-drug space even more, and further lessen its dependence on its specialty pharma business. Ideally, Horizon will shed the "specialty pharma" label altogether moving forward, putting this value-inhibiting controversy behind it for good.