The drama-filled proposed merger between Energy Transfer Equity (NYSE:ET) and Williams Companies (NYSE:WMB) took another interesting turn this week. The companies were granted approval by the U.S. Federal Trade Commission to close the merger, but on one condition: Williams Companies needed to sell its stake in an interstate natural gas pipeline that serves Florida to ease anti-competition concerns. What remains to be seen is if this condition helps or hurts the deal, which has been embroiled in a bitter legal battle.

A new hurdle to clear

In order to gain full FTC approval for the deal, Williams Companies, or more precisely, its affiliated MLP Williams Partners (NYSE: WPZ), will need to sell its 50% stake in the Gulfstream Natural Gas System, which is an interstate pipeline that delivers natural gas to Florida. The reason for the required divestiture is to ease antitrust concerns surrounding the pipeline given that it services electric power companies in Florida, which don't want to see their rates increase. 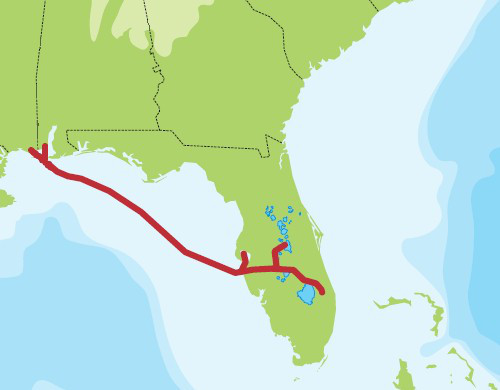 The Gulfstream System, which was placed into service in 2002, is a 745-mile pipeline that has the capacity to carry 1.3 billion cubic feet of natural gas per day across the Gulf of Mexico to market areas in Florida. The system is currently co-owned by Spectra Energy (NYSE:SE), though Williams Partners is the operator of the system.

There are antitrust concerns regarding this particular pipeline system because Energy Transfer Equity's affiliated MLP, Energy Transfer Partners (NYSE: ETP), owns a 50% stake in the Florida Gas Transmission Pipeline. That system controls more than 5,000 miles of interstate natural gas pipelines that have the capacity for 3.1 Bcf/d of natural gas. It's also the principal transporter of natural gas to Florida, delivering over 66% of the natural gas consumed in the state. In other words, by owning stakes in both pipelines, Energy Transfer Equity would in effect have a monopoly on gas transmitted to Florida, though half of both pipeline systems would still be owned by other pipeline companies. Still, it was enough of an antitrust red flag for the FTC to require the divestiture of the Gulfstream stake.

What to make of this condition?

Under normal circumstances, this divestiture requirement would not likely be a deal-breaker for Energy Transfer Equity given that its primary purpose for the acquisition wasn't to acquire this one particular pipeline system. Instead, it was interested in Williams Companies' diversified asset footprint, including its rapidly expanding Transco system and its rich expansion opportunities in the Marcellus and Utica shale plays. Having said that, Energy Transfer Equity has been looking to break up this deal for quite some time -- unless Williams Companies is willing to renegotiate the structure. As such, it could use this condition to force Williams back to the negotiating table.

Energy Transfer Equity could conclude that without Gulfstream, the deal is no longer attractive given that the company could have likely squeezed out some merger synergies if both pipeline systems were managed under the same system. Instead, Williams would have to seek a buyer for that asset at a time when pipeline assets aren't as richly valued as they'd been prior to the downturn in the energy credit markets toward the end of last year. Those credit market issues also limit the buyer base, with current 50% Gulfstream owner Spectra Energy one of the few large pipeline companies that would have the scale and financial capacity to make such an acquisition.

Another potential sticking point is the fact that the Gulfstream stake is technically owned by Williams Partners. Because of that, its sale won't directly flow through to Williams Companies, and therefore couldn't be used as a potential funding mechanism to pay off some of the debt Energy Transfer Equity would need to take on to close the deal under its current structure. In other words, selling this stake won't help either company overcome one of the deal's key hurdles.

While the FTC approval clears the merger of its last antitrust hurdle, it doesn't clarify the eventual outcome. However, it does seem to suggest Energy Transfer Equity has one more reason to claim that the deal is no longer worth pursuing under its current framework, therefore forcing Williams back to the negotiating table.

Still, it's anyone's guess as to whether that will happen, or if both companies will just choose to go their separate ways.