Steve Symington, Daniel Miller, and George Budwell
(XMFSymington)
Author Bio
As a technology and consumer goods specialist for the Fool, Steve looks for responsible businesses that positively shape our lives. Then he invests accordingly. Enjoy his work? Connect with him on Twitter & Facebook so you don't miss a thing.

Though the summer season technically doesn't begin for another week or so, good luck telling that to your children, as their latest school year comes to a close and vacation beckons. But that doesn't mean they need to stop learning. So why not take some time this month to offer your kids invaluable financial education through the stock market?

To help get you started, we asked three Motley Fool contributors to each choose a stock they believe parents would be wise to purchase for their kids in June. Read on to see which companies they chose and why.

Steve Symington: When I think about buying stocks for my kids, I'm looking for companies that not only operate with a long-term mindset -- because young investors have time on their side to let compounding do its work -- but also offer familiar products to which they can easily relate. One company I think strikes a perfect balance between the two right now is music streaming specialist Pandora Media (NYSE:P).

After all, even my 5-year-old boy knows how to pull up Pandora on whatever connected device is nearby -- be it the TV, tablet, our phones, or the Xbox -- and select his favorite stations.

As for the timing, shares are still down around 7% year to date as of this writing, even though Pandora rode a wave of momentum following the release of its stronger-than-expected first-quarter 2016 report just over a month ago. More specifically, Pandora revealed quarterly revenue rose 29% year over year, to $297.3 million, well above the high end of its $280 million to $290 million guidance, and driven by a combination of modest growth in both listeners (up 0.3%, to 79.4 million) and listener hours (up 4%, to 5.52 billion), along with 23% growth in advertising revenue, to $220.3 million, and the contributions of its recent acquisition of live-events specialist TicketFly.

To that end, Pandora also touted solid progress implementing its ambitious plan (originally revealed along with its Q4 2015 report in February) to invest $345 million this year to scale infrastructure and build new lines of business. A significant chunk of that cash will go toward creating new music services to accelerate revenue growth starting in 2017, including a goal of building a $1.3 billion subscription business over the next five years as new product tiers are developed and launched.

That's no small feat, considering Pandora expects revenue for all of this year to be in the range of $1.41 billion to $1.43 billion. But if Pandora succeeds in "rapidly bringing Pandora's audacious strategy to life," as founder and CEO Tim Westergren put it last quarter, something tells me the kids will be dancing all the way to the bank when they see the market-beating returns Pandora generates in the process.

Daniel Miller: When you buy stocks, you do so to make money and build wealth (we hope) as efficiently as possible. However, when you're buying stocks for your kids, building wealth takes a back seat, in my opinion, to teaching your kids about stocks. If you're focusing on only making money, you're really still buying these stocks for yourself.

With the teaching aspect as a priority, it's important for the kids to associate, understand, and know what you're investing in for them. Few stocks would fit into a child's life, and a well-managed portfolio, as well as Walt Disney Co. (NYSE:DIS).

Let's start from the top. Disney has one of the most powerful brands in the world and is incredibly successful with its theme parks, movies, and consumer products. If you wanted to teach your kids about brand or entertainment value, long-term strategies, or pricing power, there would be no shortage of lessons from your couch while watching ESPN or ABC, viewing the newest Star Wars or Marvel film, or while taking the next summer vacation to Disneyland.

It's difficult to summarize Disney in one graph, but this one gets close. 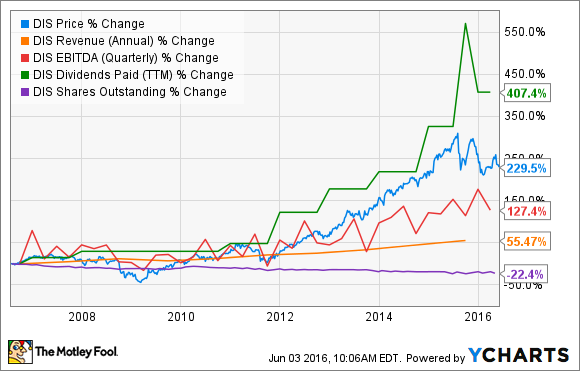 Disney has proved that it can generate meaningful growth on its top and bottom lines over the long term, all while reducing its shares outstanding and increasing its dividend paid to shareholders -- a pretty healthy scenario.

Also, parents can sleep at night with this investment because Disney has demonstrated its incredible ability to monetize its characters between all of its business segments, and its library of characters that can be used to fuel movies, theme-park rides, or TV shows is vast. If the company can solve the problem of cord-cutters, Disney will continue to be one of the safest, smartest, and kid-friendliest stocks for any portfolio.

George Budwell: I think Allergan (NYSE:AGN) is a particularly solid pick for a long-term buy and hold right now and kids should be in the stock market for the long haul with many years to grow their investments stretching out before they need to start taking money out of the market. Allergan has attracted investing gurus such as billionaire Carl Icahn and offers investors a highly diverse branded pharma portfolio that's been generating double-digit growth in recent quarters. Topping it off, CEO Brent Saunders has a proven track record of creating tremendous value for shareholders during his stints at both Bausch & Lomb and Forest Laboratories.

Turning to near-term catalysts, Allergan's shares should benefit in a big way from the $40.5 billion sale of its generic-drug business to Teva Pharmaceutical Industries (NYSE:TEVA) this month. This deal will provide Allergan with $33.75 billion in cash, along with a roughly 10% stake in Teva.

So, what are Allergan's plans for this mountain of cash? What we know so far is that the drugmaker has already earmarked $10 billion for a new share-repurchase program. Saunders has also expressed interest in putting some of this cash to work by pursuing a handful of small to mid-sized acquisitions. Perhaps most importantly, though, the drugmaker should be able to knock out a sizable chunk of its $42 billion debt load, markedly improving the overall health of its balance sheet.

Bottom line: Allergan appears set to move higher as a result of this key divestiture, making it a great growth stock to pick up for your kids this month.