Many income investors are looking for reliable dividend payers to help fund their daily living expenses. On that front, consistency is vital. To put it simply, you want to own companies that cut you a check each quarter -- in good markets and bad. Here are four companies that each boast more than four decades of doing just that: California Water Service Group (NYSE: CWT), Consolidated Edison (NYSE: ED), Nucor Corp. (NYSE: NUE), and W.W. Grainger Inc. (NYSE: GWW).

Water and California go together like... a painfully long drought. But that hasn't stopped California Water Services from upping its annual distribution for 49 consecutive years. That's right... nearly five decades! And to be honest, California is only one of the states in which this diversified water utility works.

California Water Services is the parent company to water companies in its namesake state, Washington, New Mexico, and Hawaii. It provides regulated and non-regulated water services to roughly two million people across 100 communities. Although the company's 2.4% or so yield is nothing to write home about, annual hikes for 49 years are.

The yield is at the lower-end of its trading range during the past decade or so, which means you may not want to jump in with both feet. However, if you are looking for a steady quarterly check with regular, though modest, increases, you should have California Water Services on your list. You should get very interested if the yield gets up into the low-to-mid 3% range.

Consolidated Edison is probably best known as Con Ed, at least to those in the metropolitan New York region that it serves. It provides electric services to roughly 3.3 million customers, and gas services to 1.1 million across New York City and Westchester county, a northern suburb of the city.

It also has operations in Orange and Rockland counties in New York State. It even reaches its tentacles into parts of New Jersey and Pennsylvania. And the company provides steam services within Manhattan, too. (Yes, selling steam is a thing.)

Con Ed has upped its distribution every year for 42 years. Interestingly, with a focus on distribution over power generation, it is shielded somewhat from electricity prices, which is a positive as the energy landscape shifts. Moreover, the Metropolitan New York region is a pretty good market to be in.

While the utility's 3.7% yield is more desirable than California Water's, it's toward the low-end of recent history, too. In fact, the yield has been as high as 5% and 6%.

But anything in the mid-4% to 5% range is probably a good opportunity. With four decades of hikes, you might want to initiate a small position just to get in the door while you wait for a more-compelling price to "back up the truck."

Nucor changes things up a bit, because this longtime dividend payer is one of the country's largest steelmakers. That sector has been down and out since the 2007 to 2009 recession. However, that hasn't stopped Nucor from continuing to increase its distribution year in and and year out.

The streak is now up to 43 years. And the yield, at nearly 3.2%, is fairly decent for the steel giant.

However, there's more to the Nucor story that you should know. For example, the company has lost money once in the last decade, while some peers have bled red ink through most of that span. AK Steel, for example, has lost money in seven of the past 10 years. U.S. Steel has bled in six of 10. In other words, Nucor's record stands out in more ways than one. 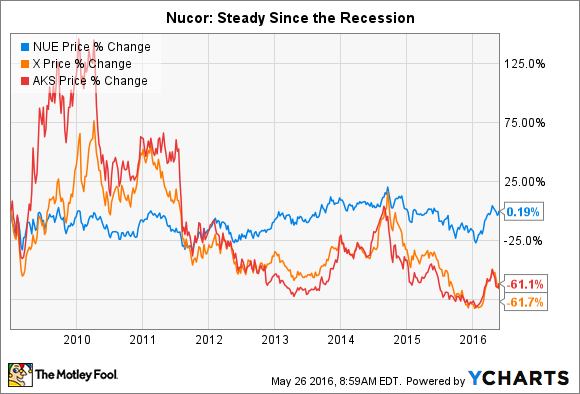 If you're looking for a regular dividend payer, Nucor is a worthwhile option even though it hails from a deeply out-of-favor industry. That said, there's some turnaround appeal here when the steel industry starts to see better days.

Another stock that cuts you a check each quarter is W.W. Grainger, which has a 45-year streak of annual dividend hikes. Grainger is a wholesaler, selling maintenance, repair, and operating supplies to industrial customers. It reaches customers through catalogs, stores, and online.

This is a relatively fragmented sector in which the company has long been able to expand via organic growth and acquisition. And it has the breadth of product to compete with anyone in the industry, selling more than 1.5 million products from around 4,800 suppliers/manufacturers.

Although the company's nearly 2.2% yield isn't huge, it distinguishes itself among the four companies here because its average annual dividend increase during the past decade has been more than 15%. So it can add a little extra dividend growth to your portfolio, while you can rely on other names to provide a little higher current income.

If you're looking to create a dividend "paycheck," you should be tightly focused on companies that have proven, over time, that they keep sending out the quarterly checks. You'll want a mix of industries, yields, and growth rates to round out your portfolio.

Utilities like California Water and Con Ed are great as a foundation because of their regulated operations and the basic necessity services they offer. Nucor is an out-of-favor company that just so happens to be a leader in its industry, which means there is some turnaround potential when steel markets pick up again. And Grainger is a great option for juicing the annual pay hike you get across your entire portfolio.

Even if you don't buy all four of these regular dividend payers, each is worth a deeper dive as you seek out stocks that cut you a check each and every quarter.