In a way, Ford Motor Company's (NYSE:F) business in China, the world's largest automotive market, has been hit and miss. The company dropped the ball and was years late getting into the emerging market, far behind cross-town rival General Motors. On the other hand, Ford also made up ground and scooped up market share over the past few years much faster than many investors expected. Further, China has finally generated meaningful income for Ford, which makes it all the more important to watch its sales development in the region. 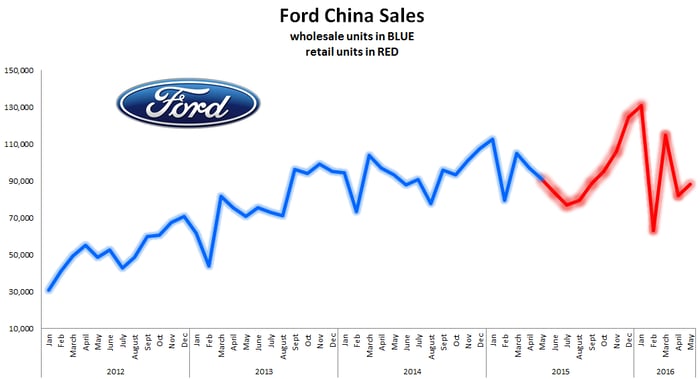 With that said, let's take a look at Ford's sales in China last month, to see if they're cooling, and one more important development for investors.

Starting from the top, Ford and its two joint ventures delivered 88,248 vehicles in China last month. That sales result was a 2.5% decline compared to the year prior's May. Part of the driving force behind Ford's sales decline last month was its Jiangling joint venture, which produces the Ford Transit van, among other vehicles. Jiangling's sales dropped 4% compared to the prior year, down to 19,692 units, thanks to slowing demand for commercial trucks in China as the country's economy and auto market continue to face uncertainty.

Because of the volatility in the graph above, it's a little difficult to grasp how sales are trending for the full year. Zooming out and looking at the full-year data, the results are a little more positive, but still a far cry from the double-digit gains investors have become accustomed to over the past two to three years.

Much of the full-year sales follow the direction of last month's results. Passenger cars did well, with sales rising 11% to 370,268 units, which were mostly driven by strong sales in the first quarter. Again, commercial vehicle weakness hindered Jiangling's deliveries, which declined 12% through May to 102,162 units. Ford's imported vehicle sales slumped a similar 43% to only 7,111 vehicles. Overall, Ford's sales in China totaled nearly 280,000 vehicles, a 5% increase for the same time period in 2015.

As China continues to play an important role in the automaker's financial results, it appears Ford is shaking things up slightly. Stuart Rowley moves from being vice president and controller on Ford's China, India, Global Strategy and Finance team to a new position as vice president of strategy. John Lawler will succeed Rowley in his former position.

If the moves and commitments lead to more transparency with Ford's business in China, that would be great news for investors. The slight shake-up also comes at a time when Ford is reportedly, per Bloomberg, contemplating producing at least some of its Lincoln lineup in China to avoid the 25% import tax on the vehicles. Ford is apparently in discussions, though nothing is final or official, with its Changan Automobile partner about manufacturing Lincolns in Chongqing as soon as 2018.

Throughout the remainder of 2016, investors should definitely keep an eye on the Chinese economy and new-vehicle demand since it'll make deciding whether or not to invest in more production facilities all the more important financially.